Mermaids Millions is one of Microgaming’s oldest slots which quickly becomes evident from the simple and straightforward design and gameplay. The graphics are a bit dated, but it’s always been a cult classic among true Microgaming fans. Mermaids Millions slots is a hit because it includes 2 fiery bonus rounds, which is super impressive for a classic game like it. Try Thor Slots, the best free slots site with numerous games available! Check our top below, which can be played with 500 free spins from the first £10 deposit (Full T&C's Apply).

How to Play Mermaid Millions Slot

The action in Mermaids Millions slot games takes place fully underwater. This aquatic slot is known for its pretty fast gameplay, designed accordingly by Microgaming. The reels are primarily blue and these cover up an entire screen so you’ll notice there is no special backdrop here. The visuals are bright and sparkly and go in hand with the sound effects apparent as you play Mermaids Millions.

Symbols on the reels include card values A, J, K, Q, 9 & 10 which have been adorned with fishy objects and the main symbols include Seahorses, Mermaids, King Neptune, Pearl-bearing Oysters and Treasure Chests. The high value symbols are the seahorse, a container full of jewels and a pearl inside a clam. The mermaid can act as the scatter while, the merman King Neptune acts as the wild symbol.

The wild can replace all other symbols except the Mermaid scatter symbol and the Treasure Chest bonus symbols. The wild symbol awards the highest payout in the game where 5 King Neptune symbols appearing on a line results in a juicy 7,500 coin payout.

A series of shells appears on the screen and players will be awarded 3 to 5 shell picks. The shells contain cash prizes that can be added to your payline wins at the very end of the bonus game. This Mermaids Millions bonus feature can be activated during the Free Spins feature, which can skyrocket your bankroll.

Other Microgaming Slots to Play

Microgaming is one of the oldest online casino slot software developers in the industry and their slot games are now also available on pay by mobile casino sites like Thor Slots. The company was established in 1994 and has made multiple hit slots just like Mermaids Millions.

Some of the most popular slots Microgaming has released include:

They also have movie themed slots like Lord of the Rings, Hitman, Batman and Tomb Raider. As is expected of an old-timer like Microgaming, a lot of their slots have already started to indicate the company’s age. Examples include slots like Agent Jane Blonde and Thunderstruck. This forces Microgaming to put in extra effort to compete with visually entertaining competition from companies like NetEnt. Some of the slots that Microgaming has released include; 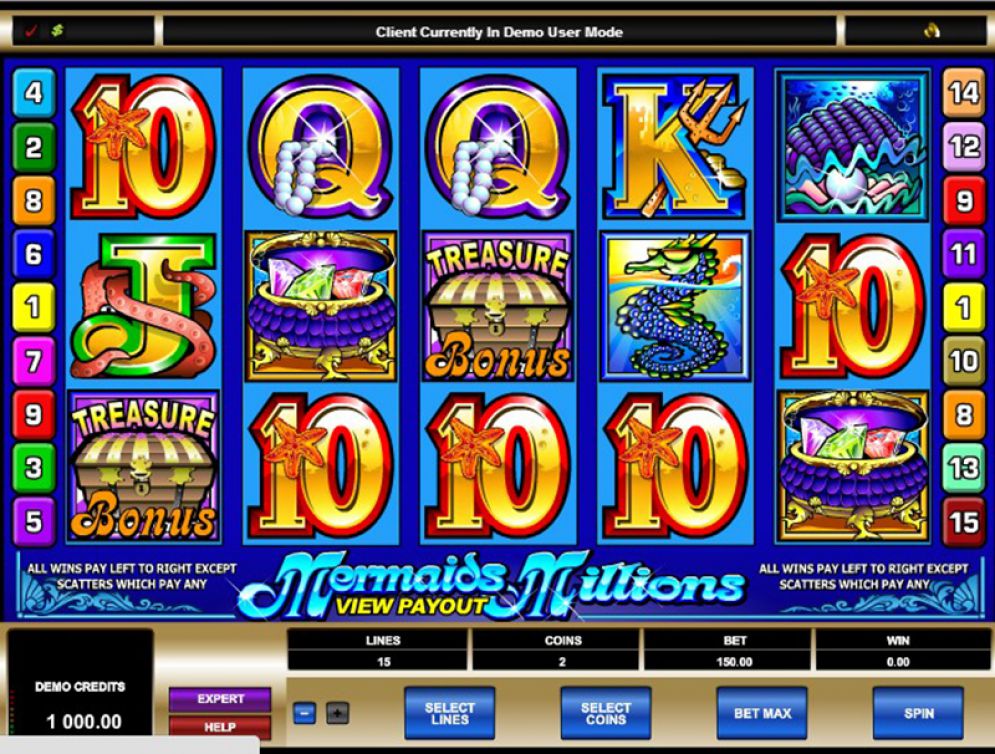 Microgaming’s Mermaids Millions slot games is an oldie, but a goodie. You will find that it’s got enough appeal to compete with modern slots from the likes of NetEnt, Playson, Pragmatic Play etc. The 2 bonus features on offer include the Free Spins feature and the Treasure Bonus feature - which are both very lucrative.

If you enjoyed this game why not also play Slingo today?