Are you ready to wield the power of the god of thunder? All to the benefit of your wallet on Thor free online slots casino, with our brand new addition - Thunderstruck slot game.

Nordic mythology is still spoken of to this day thanks mostly to the Marvel movies and their portrayal of the God of Thunder, Thor. Well in this appropriately titled slot, you get to ride the lightning and go where no mere mortal has gone before. The vikings called it Valhalla, a place full of riches where one can bask in the glow of their accomplishments in ways unseen. Well in Thunderstruck slot, you too can visit this place, all you have to be is willing, willing to make the slot sacrifices that every player must make on their journey.

For those that don’t know, Thunderstruck is a Microgaming creation, which is also available on Thor Slots, released over 10 years ago; this slot has more than proved that it has the lasting power of any present-day release.

This mobile slots title has 5 reels over 9 fixed pay-lines, which welcome new players into world unlike their own, yet so similar that they could almost call it a mirage. To begin with Thunderstruck all one needs to do is set their bets and spin away. The RTP percentage of this game is also quite generous compared to its contemporaries, sitting pretty at 96.1% which should give you enough bite for your bark.

There are also various additional features, the type of features that make standard gameplay a little more exciting. Be sure to check out the rest of our Thunderstruck 2021 review and our welcome offers below to see if this is the right slot for you!

Thor has existed for centuries in not only pop culture but in Scandinavian folklore too, this makes him highly reputable as a character and the basis for many online slots that feature him front and centre either in the name or in the reels somewhere like in Thunderstruck. The Marvel movies have only brought Thor closer to the limelight. The Chris Hemsworth interpretation of the character has forced all Thor media, from comic books to even this slot, to take the appearance of the more modern interpretation of the character. Going into this slot we were only basing our opinions off of the character and less so of the slot, so we were rather happy when we discovered this slot to surpass our expectations in ways we never truly imagined until we sat down and ran a few spins.

With a name like Thunderstruck one would expect the look of this slot to be somewhat weather-related, and you’d be right to think that. Developer Microgaming has managed to perfectly capture what feels like a constant storm, using both sounds and imagery. The soundtrack of Thunderstruck is very epic, putting players in a position where they themselves feel like the mighty Thor. The background of Thunderstruck is set out against a very navy blue, a navy blue that allows the symbols on this slot to reflect perfectly off of. Most of the symbols here are a very bold yellow/organge, the likes of which only remind us of He-Man. This is especially true when looking at the various low value symbols that can be found on the reels. We spotted an A, J, K, 9 and 10 that all gave us low wins, but wins nonetheless. 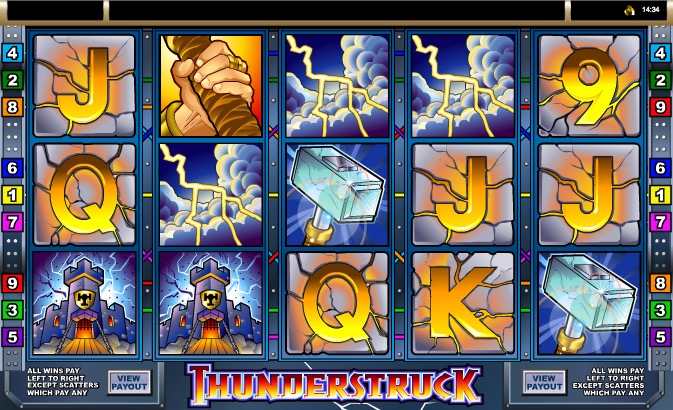 Like with any online slot, most symbols that you see on Thunderstruck reels will have a much higher value to that of their counterparts. Symbols in Thunderstruck include: Thor himself, a bell, rams, a castle (presumably in Asgard), a horn and Thor’s hammer. Each symbol here is very distinct looking in both design and colour, making it very simple for players to distinguish which symbol is which when running the reels. We should note that this slot is of a cartoon theme, however it leans more towards the Dragon Ball Z style of art rather than what you’d expect children to watch on a Saturday morning.

Thunderstruck is a slot that is played out over 5 reels and 3 rows, making the action very close and in your face, this was one of our biggest takeaways from this slot: the fact that it was very immersive over only a handful of spins. 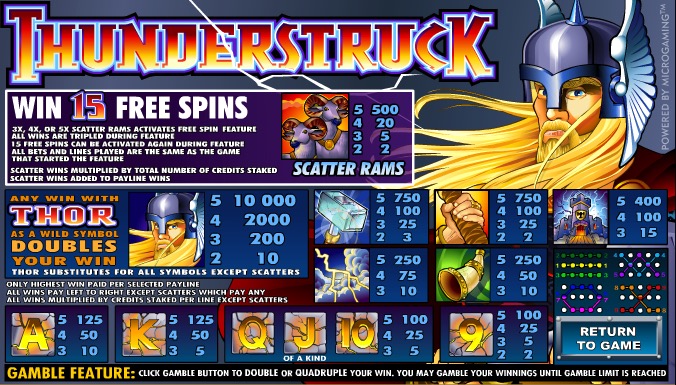 Thunderstruck is not without various features that strike basic gameplay at the heart, altering them to fit a mould more fitting for the god of thunder. These free features are all utilised on the reels and will often make you reconsider the ways you might play in future if you happen to take a liking to whats on offer here. 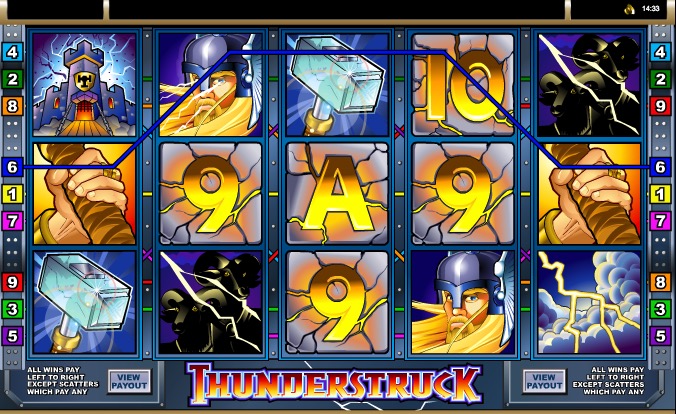 Should you Play this Slot?

We’ll be honest with you, recently there has been a lot of Thor related slots due to the popularity of the movies, and although some are good, most see only to copy a very basic template in hopes of making some quick cash from players who might not know any better. Thunderstruck is very much the opposite, not only is this a rewarding slot but it is also a very relaxing despite the wild thunder action you see before you. If you are in the market for a new favourite slot, then you best get ready, because Thunderstruck is here and waiting. Or you may also want to try Lucky Leprechaun!

The words Microgaming and top-rated slot games are pretty much synonymus. They have been creating superb games with high RTP, exciting jackpots and interesting gameplay. Thunderstruck is just another amongst the Microgaming slots we offer here at Thor Slots. Other top picks that can be enjoyed with our up to 500 free spins welcome bonus include: