May the luck of the Irish forever reign true here at thor slots!

Just what lies at the end of a rainbow? Why gold of course, although in real life we think it’s next to impossible to find the end of a rainbow which is why it makes it so frustrating that we associate rainbows, leprechauns and Ireland with gold. In Lucky Leprechaun however, players are given the opportunity to make their own luck, all the while reaping the rewards of the ever-elusive pot of gold that is so close yet so far… Lucky Leprechaun is a Microgaming developed title, if you haven’t heard of these guys then we’ll assume this is your first online slot experience. Mircogaming are known for their success, and they wouldnt have this reputation where it not for slots such as this. Lucky Leprechaun is at the top of most sites frequently played lists for a reason, and that reason lies in its replay value and the theme that this slot has going for itself despite the thousands of Irish slots that have saturated the slot market presently.

Lucky Leprechaun is a 5 reel slot played out over 20 fixed pay-lines. This 96.33% RTP slot offers various additional features for players to choose from, these features can be found in many other online slots although we found that the presentation and design of them here was executed better. If you’re still conflicted about Lucky Leprechaun then might we suggest checking out the rest of our written review below?

We tend to review a lot of slots of an Irish theme, and to be honest a lot of them are just copying the same formula again and again to the point of insanity. The same goes for Egypt themed slots, but hey if it’s what the punters want then more power to them. The expectations going into Lucky Leprechauns was quite high considering how the slot is presented on many sites as being one of the best to play and is among the most played slots on a lot of sites, this coupled with the art style led us to having quite a good time for the spins that we played. We could easily see how it was so popular, but we’ll get into specifics further in this review. 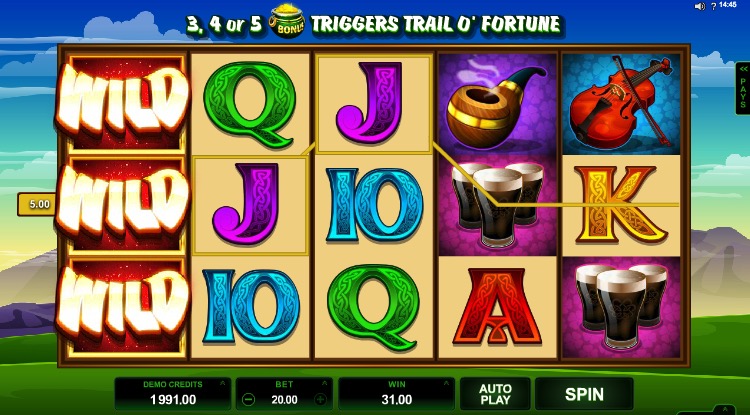 Played out over 20 pay-lines, 5 reels and 3 rows, Lucky Leprechaun might be Microgaming’s pièce de résistance. The developer has been around a while but not even we could comprehend the power of this slot. First off let’s discuss the look and feel of this slot. Lucky Leprechaun is played across a very serene mountain top, where other mountains can be seen off into the distance. The sun is shining and the birds are probably singing, everything looks perfect; almost like you’ve found the end of the rainbow which is where this slot takes place!

The reels are very plain, but this is a purposeful choice as the various symbols that sit on the reels are all of a different colour and shape which sets them out from each other. All the symbols here offer something different in not only appearance but the value they possess. Our favourite symbol happened to be the pint of Guinness but that’s just our preference. Other symbols here include: smoking pipes, lower value letters/numbers as well as the bonus pot of gold. 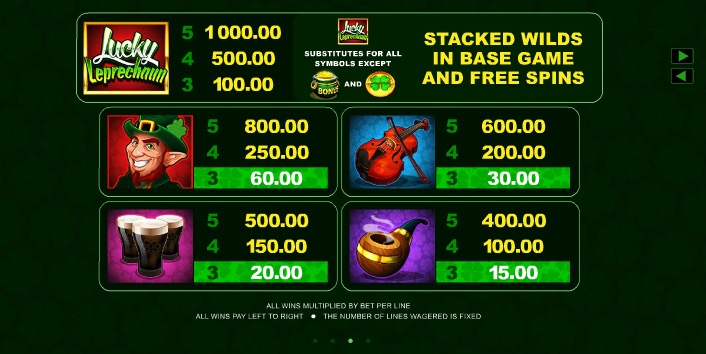 With Lucky Leprechauns being so popular, you would expect this slot to have a lot on offer for what you’re putting money into, and you’d be correct. There are lots of ways one can play Lucky Leprechan all with great success.

LUCKY CLOVER SYMBOLS: If Lucky Clover symbols find their way onto the fifth reels during gameplay then they will provide players with 5 free spins and a x2 multiplier.

WILDS: The games logo serves as this slots wild symbol, and will substitute for all other symbols bar the scatter. On top of that, at random intervals the leprechaun symbol will turn wild, thus providing players with alternate paths in matching wild symbols.

TRAIL O’ FORTUNE FEATURE: The pot of gold symbols happens to be Lucky Leprechaun’s scatter symbol, when matching 3 of these symbols will one gain access to the Trail O’ Fortune feature where players will have the chance to multiply their scores tenfold depending on what they choose on the wheel. The more scatter symbols one matches the more of these games they will earn.

We can’t stress enough the importance of slots such as Lucky Leprechaun to themes in slots that are overdone to death. Lucky Leprechaun has found a gap in the market by trying something a little different, and the results of which are sure to keep this slot at the top of the pecking order in terms of what slots players are playing most. Microgaming should be given an award of some kind for their increasing tendency to create slots that go against the grain, offering players something new for their money and not the stagnant status quo. If you’ve yet to experience Lucky Leprechaun then wait no longer! Play now. Or you may also like Shaman's Dream.

Other Games by Microgaming

Established in 1994, developer Microgaming has all the characteristics of a game developer that is at the forefront of customer satisfaction. Microgaming are a dynasty at this point and they wouldnt be able to achieve that title without being able to act like a chameleon; changing with the times seamlessly with each and every recent online slot games release. Most developers only have a life span of around 2 years at most if they fall behind, Microgaming have more than stood the test of time and will be around for a lot longer if their track record of slots are anything to go by. Slots in the Mircrogaming catalogue include: