Get ready to visit the magic world of wonderland and chase after the famous White Rabbit free slots online and walk away with great prizes. The White Rabbit video slot is based on Lewis Caroll’s Alice stories by Big Time Gaming. If you manage to trigger the free spins bonus round, the reels expand offering 248,832 MegaWays. The game also features wilds and wild multipliers that can triple the payouts. More on this through our review below, or play one of these free slot games today!

About Big Time Gaming – the Developers of White Rabbit Slots

Big Time Gaming is one of the few top free slots games developers to hit well above their weight. The company was started by top gaming experts. The company founder, Nic Robinson who is also the CEO, has been in the business for several years.

Big Time Gaming has a proven track record of successful games. This can be seen in the amount of business they conduct.  The company has several partnerships including big casinos.  They also have partnerships with other software providers within the industry.  This has helped them broaden their slots portfolio.

When it comes to their products, Big Time Gaming has a record of producing some of the eccentric slot games. Their slot offering is quite competitive. Some of their names are on the list of the biggest names in the industry.  Their graphics, impressive gameplay and bonus features match to none from other developers. It is only fair to say that the company has achieved a big fraction of the gaming industry. The developer provides games that are fit for the "millennial generation".

While the White Rabbit is one of Big Time Gaming’s popular games, there are other top games by the developer as well. Some of their other popular titles include:

How to Play White Rabbit Free Slot Games - Getting Started

The White Rabbit’s design has a slight dreamlike feel. The game is set against a forest background filled with trees and giant mushrooms. You will come across most of the Alice’s famous creations on the reels. These include Dodo, Mad Gatter, Tweedledee and Tweedledum, and the Cheshire Cat.  The Red Queen is the most rewarding symbol, paying off 25x the total bet for five on an active payline.

All symbols can appear in small or large formats. This means that they can occupy more than one position on the reels. In the background, you will see a caterpillar. You will find that it randomly adds up to four bonus wild symbols with multipliers of 2x or 3x in the base game. 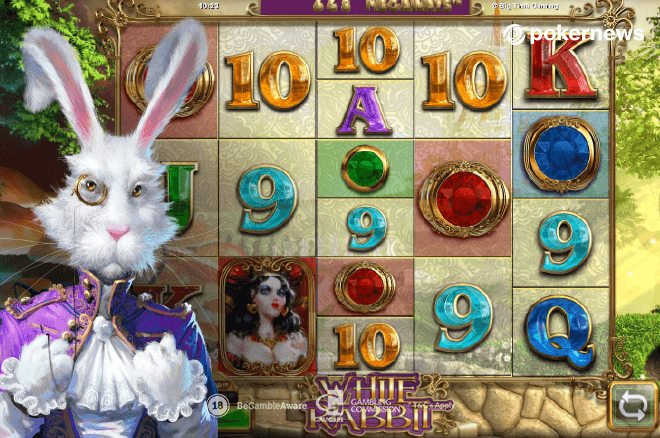 The slot features a March Hare which is the scatter symbol. When it lands on the second, third, or fourth reel, it triggers the Free Game feature and you are awarded 15 free spins. The free spins are played on a new set of reels as you go down the rabbit hole. On the reels, you will now come across the cupcake symbol. This is immediately replaced by two new symbols.  This is referred to as the Extending Reels feature.

When the reel stretches to its highest level of 12, the feature is retriggered and you are awarded 3 to 12 free spins. You can reactivate up to 5 times which potentially allows you 75 free spins in total. At this level, more Red Queen symbols and Wilds are added to the reel. The extended reels offer you with more ways to win—over 240,000 combos if you fill the reels to their potential.

To raise your winning chances even more, make sure to check our promo codes on Thor Slots!

The Buy-In Option on White Rabbit

If the above feels exciting and you don’t have the patient to wait for the expanding reels feature to trigger, you have an option to buy it for 100x your stake. Additionally, each time the feature drop symbols appear on the reels during the main game, the stake amount required to bet the bonus decreases. If this reduces to zero, the bonus is re-triggered. 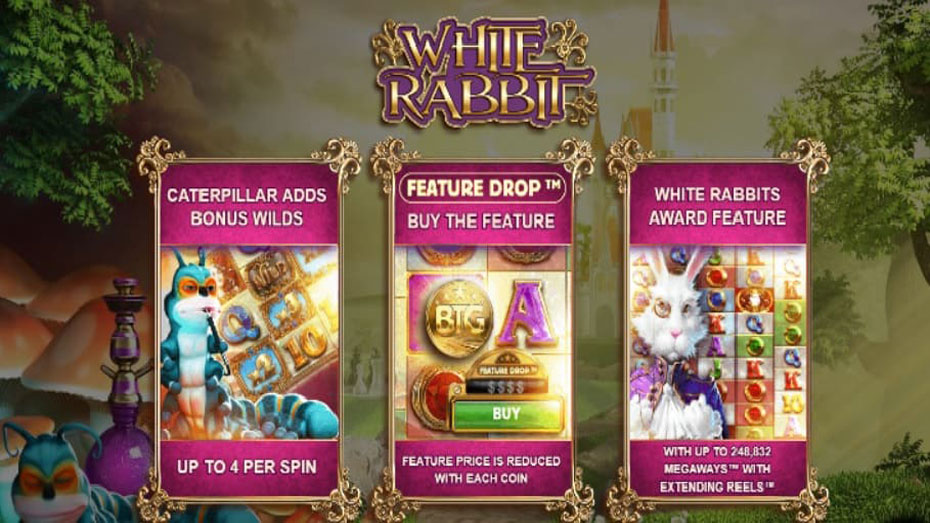 The maximum bet on White Rabbit is $20, which means that even low budget players can play this game.  The minimum bet is &0.10 which is incredibly low and easy to get started.

When it comes to the payouts, it is difficult to quantify. The highest paying symbol pays 25x the stake. However, considering the high number of pay lines in the free spins features, the payouts can increase significantly. You can expect generous payouts from this slot if you take into account the increased paylines in the free spins feature and the high RTP of 97.72%. Try this pay by mobile slots now on Thor Slots!

Alice in Wonderland is an unusual book full of twists and strange occurrences. You will find that nothing feels quire right and you can expect anything to happen. Big Time Gaming has done a great job of using this story as an inspiration and developing the White Rabbi slot.

The game is truly different and the quirkiness is something that will not appeal to many players.  But considering its uniqueness, this is something that remains unbeaten. The uniqueness passes over to several aspects. Things such as the feature drop quickly spice up a gaming session and is an element that is uncommon to slots. The game offers you with so many extras such that the excitement never ends. There is always something new coming up and it makes you want to keep on spinning the reels.

The reels change their size and shape! While this may appear complicated at first, you will love it once you get used to the game. In particular, you will love how it affects the combinations and payouts. This is a new aspect that you do not see from other developers and therefore, it is something that is worth checking out.

The graphics of the game too are something worth mentioning. For the most part, they are clear and crisp. However, some of the symbols have an inexplicit dreamlike quality.  This increases the touch of wonder to the order of proceedings.

Generally, we believe that White Rabbit is a game that is worth your time and money. It is a game that need to be played at least once. If this game doesn’t seem like your type of game, why not check out another unique one – the Fishin Frenzy Megaways slot instead?