What Is Slingo? Slingo is every slot lover and bingo lover’s dream as it combines aspects of both slots and bingo into one. It’s a strange combination, but it works perfectly and sometimes is even amazingly entertaining. Slingo is one of those games you either follow obsessively or have never heard of. The slot serves up some compelling gameplay and offers decent jackpot wins, unlike set bingo prizes where the jackpots are your only chance to win big. Not a lot of online casinos offer Slingo so when you have the a chance to spin, go for it. Slingo only became available to play in the UK since 2015 and spread out to the rest of Europe slowly.

If you’ve always been wondering what is Slingo, how to Play Slingo, where to play Slingo, etc. Keep reading to know more about these slots and bingo hybrid. There’s no better time to figure out what these new style casino games entail.

About the Slingo Gambling Game

The aim of Slingo is to complete win lines and win the amounts displayed on the paytable. When you start up a Slingo slot machine, you are greeted with a 5×5 bingo card. Below the 5X5 bingo card lie 5 reels, but only one is a row high. Startup Slingo by paying for a fixed amount of spins on a single reel. This usually ranges from 15 to 20 spins.  Only the first 11 or 16 spins will form part of the package, while the rest will have you using free spins or your total cash in points.

The goal will be to match as many numbers as you can on the bingo card using the most spins. Win lines in the game are called Slings. Slingo is nothing like a slot machine, because in slots symbols on a pay line determine the amount you win. In Slingo, the lines in the bingo table are the ones to determine the amount you win. So players go revealing numbers indicated on the spinning reels and mark off the respective numbers on the bingo card.

A Slingo is created when players complete a horizontal, vertical or diagonal line on a grid. The more the Slingos you form within a fixed number of spins, the more wins you form on a paytable. Do you know the most amazing thing about Slingo? It’s that there are literally aspects of Bingo and Slots combined. So, if you’re a fan of both, you will be geeked at Slingo. It’s got far more than numbers. There are special appearances from all your favourite symbols including scatters, jokers, wilds, super jokers and special Slingo symbols as follows;

Slingo has some rules; there is a set time limit on how long it takes to place your jokers on the table, so be sure to keep track of the game as it goes. Also, it works like a slot machine, but at the same time, it doesn’t. You can't just choose the auto spin setting and watch the gameplay out.

There are some punters who tend to avoid Slingo for fear of bets. The common misconception is if it offers a 2 in one dose of entertainment, of course it would come at a higher cost. However, fear not as Slingo is far from it. And even though you prefer heavy bets, know that you are already well catered for here. The Slingo casino machines here have different variations in betting and are able to suit the different budgets. Remember that you should always exercise safety first gamble responsibly and strictly within your budget.

Betting ranges in Slingo vary from as low as 0.50 up to 100. Some fall to 0.10 or go as high as 200, but count as an exception to the general rule. The minimum bets you can place in Slingo include;

There’s plenty of room for both low rollers and high rollers. It’s important to note that there are many Slingo machines and most work differently too. Beginners need to make sure they choose a game where they get paid for a single Slingo win. Some Slingo machines start paying only when you have 4 Slingos or more, while others have jackpots, and then there are also those that are more volatile than others and are basically real money slot games.

Enjoy this article, why not read and play our Irish Eyes game? 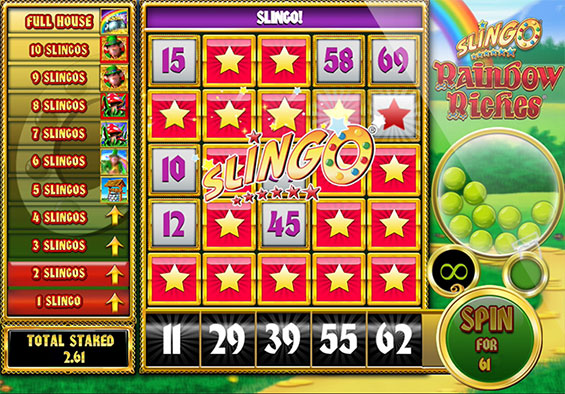 Slingo is something every type of gambler should try at least once in their lifetime. The range of options, creativity and versatility of the game make for an enjoyable time during gameplay. The thing that makes Slingo stand out is that there’s nothing like it. It’s one of those things you never thought you needed until it was invented, a little like sliced bread. The combination of Bingo and Slots comes together beautifully, such that true fans will feel fully catered to. You will enjoy thrilling bonuses from the slot machine aspect of the game and the challenge and intricacies from the Bingo aspect.  It will make for an enjoyable game for all players regardless of whatever level you are at. Give it a go today and see for yourself.