If you are new to slot free spin games and casino games then you’re probably wondering what on earth is Slingo?! Slingo combines the best of slots and bingo games. If this sounds great to you and if you’re also a fan of the classic Rainbow Riches slot then you’re in for a treat with Slingo Rainbow Riches.

Slingo Rainbow Riches is based on Barcrest’s popular slot Rainbow Riches. It has an Irish luck theme with rainbow coloured graphics. You’ll see lots of rainbows, leprechauns and pots of gold when playing this Slingo game from just 10p per spin.

The phone casino game Slingo Rainbow Riches does have some exciting bonus features including a magic toadstool bonus and a road to riches bonus.

Slingo was launched back in 1994 and since then has amassed over 55 million players worldwide. Slingo is a cross between slot machine games and bingo. Playing Slingo is fairly simple and you simply need to complete lines on the board which looks like a bingo card.

The numbers will be marked off when you match them. Slingo Originals games are a bit more exciting than bingo free slots as they have imaginative themes, top-quality visuals and fun bonus features too.

Slingo Rainbow Riches is a Slingo slot game based on the very popular Barcrest slot Rainbow Riches. It’s played on a bingo board which has 5 reels and 12 paylines and it has an RTP of 95.6%. The Irish luck theme brings lots of charm to this slot. Symbols include leprechauns, wishing wells, rainbows, and mushrooms.

Press the green spin button to begin your game and adjust your bet accordingly. Match numbers on the grid to win and get a full house when you fill the reels! 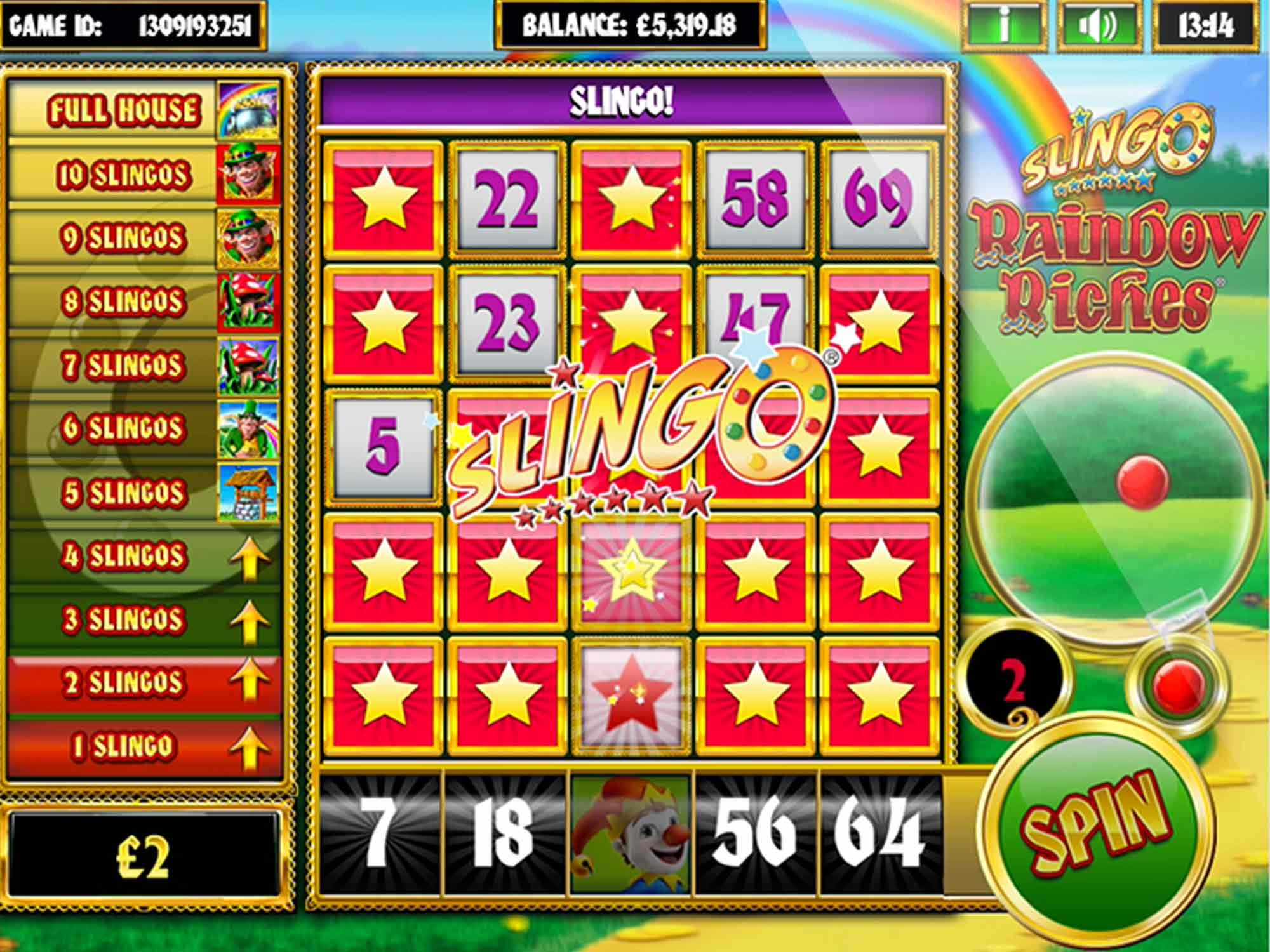 Cash Crop Feature - There are lots of great bonus features in Slingo Riches which are unlocked by landing 5 Slingos. When you unlock the cash crop feature, 50 gold coins will appear on the screen. When they stop spinning, a cash multiplier will be revealed.

This feature has several rounds and you can keep on flipping coins until you no longer win. The more you play, the more the multipliers will increase. You can win a multiplier of up to 10x here. All of your cash prizes will be awarded once the feature ends.

Wishing Well Bonus Feature - Who doesn’t love free slots with pick me style games? Slingo Rainbow Riches has plenty! The wishing well bonus feature is also a pick me style game where you will make a pick to reveal a prize.

Road to Riches Feature - There’s also a road to riches feature which is very similar to the one in the original Rainbow Riches slot. You will be taken to a new screen where you will be presented with a wheel. Spin the wheel to reveal how many spaces up the golden trail you will take. During the trail, you may land on prizes which is very exciting.

Road to Riches Red Feature - The road to riches red feature is similar to the road to riches feature but is even more rewarding. The prizes have been doubled so you can pick up even greater wins here!

If you’re looking for free slots no deposit to play that are jam-packed with exciting bonus features then Slingo Rainbow Riches is the perfect slot to play.

There are so many entertaining features from the magic toadstool bonus to the road to riches feature with big cash prizes up for grabs. The top win in Slingo Rainbow Riches is a golden 1, 000x your bet. For more Slingo games, check out the Slingo Extreme slot!