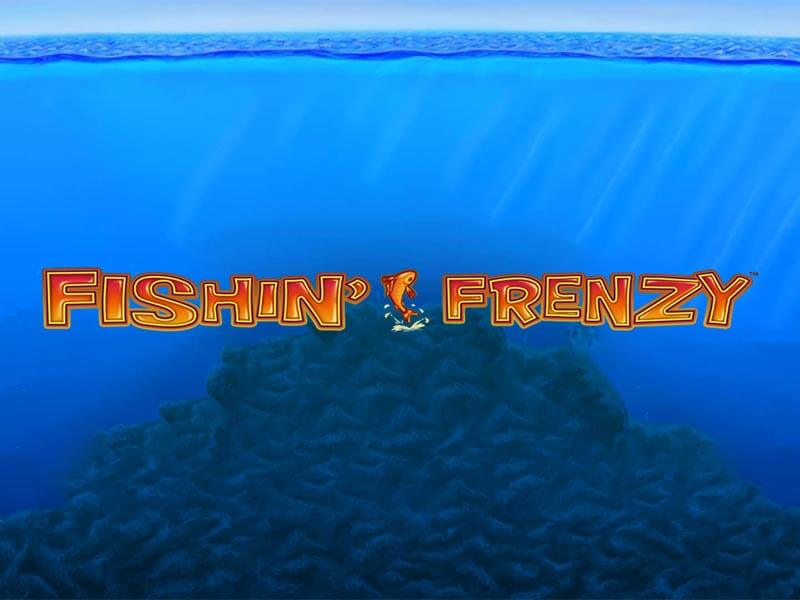 Take a trip and go fishin’ today!  You don’t have to actually head outdoors or even leave your home to see if you can catch a decent prize with Fishin Frenzy slot game. There are fish of all colours, shapes and sizes throughout this slot which adds a strange sense of fun as you play.

You really want to play it to see if you can hook another happy looking fishy and see what cash prizes are attached to your latest haul. Whether you are a fisherman or woman in the real world or not, we guarantee that you will fall hook, line and sinker for this fun, fish-filled and frantic play for fun free slots game. Approaching its sixth year since release, Fishin’ Frenzy has been an incredible hit game from Reel Time Gaming. Not only has it been one of the best slot games they have ever released but it has remained as one of the top-performing games in the Slot Rank charts.

Currently, Fishin’ Frenzy resides at 16th place and has also gained itself a Top 25 Golden Badge. With such big accolades, there must be some fabulous things to come out of this pong and you would be absolutely right. Firstly, the wins may not be the biggest out there but their frequency replaces their size. Play Fishin Frenzy for long enough and you will soon start racking up the cash, just as any keen fisherman would start to see a good return on plenty of time spent on the river bank.

Secondly, the Fisherman Wild has a huge payout of 500 times your initial wager, which, depending on the size of your initial wager, can lead to considerable cash prizes. Lastly, the impressive volume of free spins available in this fishy slots game is one of the biggest attractions to the game. You need to look out for the fishing boats to be in with a chance of winning plenty of Fishin Frenzy free spins for yourself as you play. So see if you can land at least three fishing boat symbols as you fish for tonight’s supper so that anywhere between 10 and 20 free spins are yours for the taking.

Players love that they are rewarded so much and so often in this game and they can then keep on playing and increase their chances of winning cash prizes without having to spend a single penny of their hard-earned cash to be in with more chances to win. Read our full gameplay and mechanics review of Fishin Frenzy below.

Fishin Frenzy is a slot game which is very accessible to all different players for multiple reasons; you can begin playing Fishin’ Frenzy for as little as 1p per spin, though some players may wish to maximise their bets to £10 each time they spin the reel.

This mobile slots game is a 5 reel, 3 row, 10 payline slot which can be played on any desktop. Though this is a not as easily accessible as many other slots game which can now be played on many different types of devices, it does not seem to have hindered the popularity of this fishy game in any way at all. But perhaps the fact that you have to be in one place to play this game is part of the catch?

In terms of mechanics, Fishin Frenzy is a low to mid variance slot game which has an RTP of 96.12%. This shows us that the wins will ever be enormous when playing this game, but as they are so frequent, you can soon create quite a substantial win, especially when played over longer periods of time. This becomes clearer once we indicate that there is the potential for 2,000 times the initial wager of a player to be won whenever they play Fishin Frenzy slot which could be an impressive £20,000 each time. 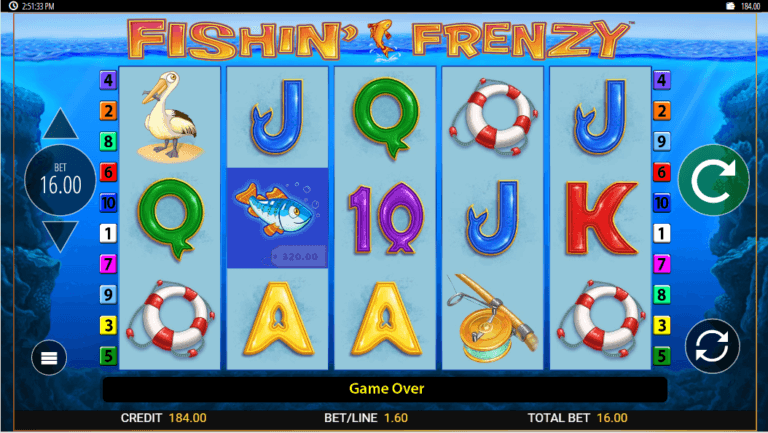 When it comes to actually going fishing, like real-life fishing, there are certain things you would need to take with you to be successful in your quest. When playing Fishin’ Frenzy slot, this is no exception, because all of the things you would require when participating in the real thing actually appear at the symbols in this slot. So whether you go fishing or not, you will be sure to recognise the majority, if not all, the symbols in this game.

The highest paying of which is the Fisherman who is also the Wild of the game, and if you are lucky enough to be able to land five of these symbols at the same time, then a hefty 500 times your initial wager will be in the bag for you. Though there are some other high paying symbols in Fishin’ Frenzy, this is by far the best, but you could also look out for the seagull, fishing rod, tackle box with a rubber ring, blue fish, and the card suit because they will all increase your initial wager from anywhere between 10 and 200 times.

There doesn’t really seem to be any big bonus features available in the game of Fishin’ Frenzy so you have to rely on one of two things to be able to increase your winnings. Either landing yourself one of the higher paying symbols as mentioned above or waiting patiently to be able to bag yourself some Fishin’ Frenzy free spins. To do so, you need to align a minimum of three up to a maximum of five fishing boat symbols which will see you awarded with anywhere between 10 and 20 free spins.

As the fishing boat is your Scatter symbol in Fishin’ Frenzy slot game, it is your gateway to be able to access your free spins which will be hugely beneficial to any player as everyone wants to be able to play slot games without having to spend a penny. If you are lucky enough to land yourself with some free spins, then you will see lots of blue fish appear on your screen. No, you haven’t gone mad, they are there for a reason and it could prove rather rewarding in the financial sense.

Every blue fish has a financial amount linked to it. So land the fisherman Wild and see what he reels in as it could just be the biggest and best catch of the day that you’ve ever hauled in. With 50 times your initial wager as the maximum prize available on a blue fish, this could be the most profitable catch you’ve ever pulled in. See what you can pick up at the end of your line today and big bucks could well be yours sooner than you ever thought with Fishin’ Frenzy slots! 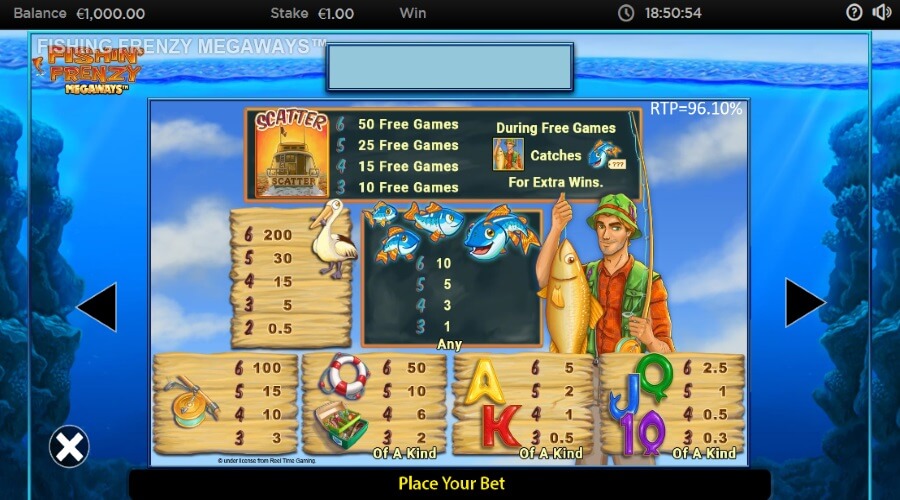 They might be a small company but this Australian games company, based in Queensland, certainly knows a thing or two about how to create impressive games for the online market. Having been a name we have associated with slot games for around a decade now, they have only fairly recently started created online slots games, but they have had a huge success since they first began this new venture in 2013.

Since then, they have created over 100 different slots games games that have seen players increase their love of slots bonuses and games even more so than before. With topics, graphics and bonus features to suit players of any experience level, there is always something new to find from Reel Time Gaming.

Fishin’ Frenzy does, of course, rank highly here, but there are multiple others RTG slots to play on Thor Slots:

The Verdict on Fishing Frenzy Slots

The game of Fishin’ Frenzy is an interesting one, because you feel as if you are interacting in a traditional outdoor sport without actually having to leave the comfort of your own home. Though this game is not accessible to every type of player due to the fact that it can only be played on a desktop computer, this has not prevented it from continually climbing the Slot Rank charts and staying at the top.

On the other hand, Fishin Frenzy is highly accessible to players with smaller bankrolls but they are still able to play this fun, popular and rewarding slots game for long periods of time. From everything that we have discovered about Fishin’ Frenzy, it really quite clear why this slot has remained so popular for almost six years now.

It has so much potential despite being so simply created but it is hugely loved by players all over the world. The fishing aspect is fun and you don’t have to be a real-life fisherman to enjoy this slot. In fact, your first time fishing might be the best catch of them all. If you loved this slot, you might also want to play Eye of Horus by RTG.

Did you know this about Fishin Frenzy? (FAQs)

Many uk players wonder about the success of Fishin Frenzy, so we touch upon these questions below.

What makes Fishing Frenzy stand out?

The high-value symbols are relied heavily upon by the players, with the most financially rewarding of these being the fisherman himself. This slots game really lends itself to players who are perhaps new to slots gaming online because of its simplistic nature, lack of complicated bonus features which can often be rather confusing to players unused to participating in this style of game, and also because bets can be placed from just 1p per spin of the reel.

How can I win big on Fishin Frenzy?

This is brilliant, much loved, and frequently played slots game from Reel Time Gaming which offers gamers the chance to win substantial numbers of free spins.This means that there is a vast chance that gamers are able to win cash prizes without having to spend their credit which is always seen as a bonus. This is fortunate really as there are not really any bonus features to speak of specifically, so the free spins are where the majority of the action is at in this game.

Should I play Fishin Frenzy or the MEGAWAYS version?

Interestingly, despite the fact that Blueprint Gaming have created a potentially more profitable version of this game, known as Fishin’ Frenzy Megaways, it has been nowhere near as successful. It seems that although this modern successor has more bonus features, more paylines and therefore more ways in which cash prizes can be won, players seem to enjoy the traditional game much more. Players have not paid anywhere near as much attention to the Megaways equivalent to the classic Fishin Frenzy game which clearly shows that sometimes the oldies really are the best.

Why is this Fishin Frenzy Game so Popular?

The concept of Fishin’ Frenzy was innovated and designed thoroughly by Reel Time Gaming who released this popular slot in September 2014. Though it is into its sixth year since it was released, it is still just as popular as ever with players jumping online to catch their next bite. Currently, the game of Fishin’ Frenzy sits at number 17 in the UK Slot Rank Charts so it is most apparent how much love gamers all over the world have for this fish-filled game.