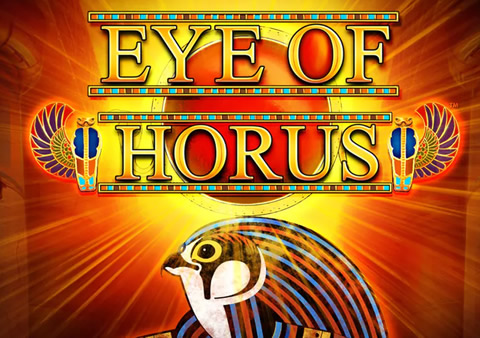 Overview of Eye of Horus Slot

This RTG slot is rather simple in its appearance and its graphics, but do not be fooled by its initial aesthetics, as it is actually an action-packed slot game. Taking a lot of inspiration from the stereotypical slot machines that you would find in a bricks and mortar casino, Eye of Horus game actually has an impressive amount of available free spins for players to take advantage of wherever possible.

This means that players are able to increase their winning potential without having to spend a single penny of their credit to do so. This has to be one of the main draws for gamers of this game because it increases their chances so dramatically due to the frequency of the awarded free spins. The Eye of Horus mobile slots, as you would imagine, is filled with all of the Egyptian style symbols you would expect to find in such a game.

Start spinning the Eye of Horus reels and you will see all sorts of Ancient Egyptian artefacts, hieroglyphs telling a story, Scarab beetles, Anubis and many more. We must not forget the Eye of Horus as we discuss the main symbols of this game as this is the most important of the game because it is the highest paying symbol.

But not only is it important for that reason, but it is also highly symbolic which is why it has been used as the main symbol of this popular slot game. It represents health, power and protection, too, all of which will come very much in handy as you play this slot. Whether you are a frequent slot player or new to playing and looking for free slots games, this is certainly a game that anyone will enjoy playing.

It seems to have stood the test of time, much like the Egyptian Pharaohs, as it has been highly ranked in the Slot Rank charts since its release in 2016. But just like many other trepid explorers before you, you will have to step inside the tomb for yourself to reveal all of these games hidden secrets.

Having been released back in September of 2016, this may not be a recent slot game release but it certainly does remain one of the most popular slot games. With an Egyptian theme, enticing graphics, and a great number of free spins up for grabs, it is easy to see why this game has been such a big hit with gamers all over the world.

Though the theme of this slot is quite clearly Egyptian, it has not been created in a way that feels as if the topic has been exhausted. It has a rather classic feel to the game, and though its appearance is not hugely flashy, it will help to remind players why they fell in love with playing slots in the first place.

Taking its inspiration from the traditional brick and mortar casino games that we are all familiar with, this slot has been created so that its aesthetics look reminiscent of this play style, but with bonus features that will bring players so much more. More fun, more enjoyment, and hopefully more winnings could be just around the corner as you play the game of Eye of Horus at your leisure. 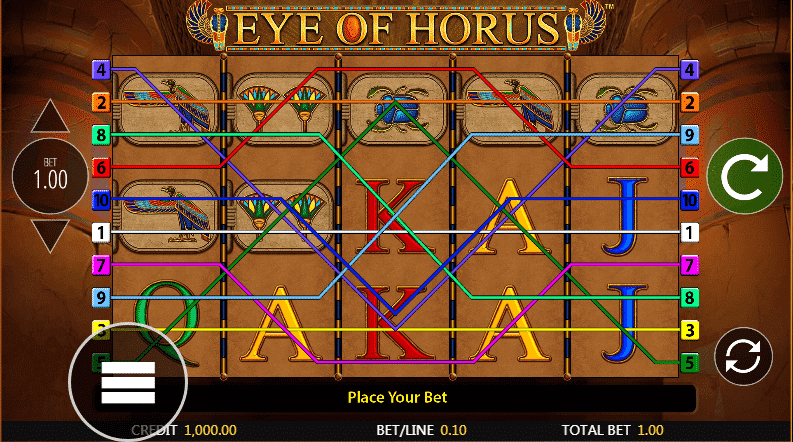 The game of Eye of Horus is a medium variance slot with an RTP of 96.31%. This means that players stand a good chance of being able to win substantial cash prizes though the frequency of winning is not enormously high. With players are able to get their hands on an impressive 10,000 times their initial wager, it is possible for over 1 million coins to be won whilst playing this game if luck is on your side.

Bets can be placed from as little as 1p up to a maximum bet price of £20 per spin of the reel. This is a 5 reel, 3 row, 10 payline slot game with many different bonus features available to enhance the player experience. It is really easy to play this slot because it is so readily accessible because it can be played on any type of device, including those of mobiles, desktops or tablets. This means that it is hugely convenient for players to be able to access this slot wherever and whenever they choose to do so.

The Eye of Horus, you may already have guessed from the title of this game, plays an important role in multiple ways. Firstly, it is the highest paying symbol in this game, so see if you can align five of them at the same time to be able to win a cool 50 times your initial wager. There are plenty of other exciting symbols for you to look out for too though, including the hieroglyphs, Scarab beetles, Anubis, Ra, and many more precious looking Ancient Egyptian artefacts.

Though they will all assist you in a handsome return if you are able to align multiple of them at the same time, none will give you a higher reward than that of the Eye. The Wild symbol in Eye of Horus is the Horus.  It was the birds God of Ancient Egyptian times and still has a rather regal presence which you will see for yourself if you are fortunate enough to come into its presence. This is your Wild and it is also able to expand.

A fun bonus feature of this slot is the Gamble Feature which appears every time you win. You will see playing cards at the side of your screen and this is the symbol representing that you are able to gamble if you choose. You do not have to gamble, but winnings can be significant if you are successful so it can be more than worthwhile taking the chance. But be aware that if you lose your gamble, you will lose all of your winnings.

The most enjoyed feature of the Eye of Horus slot is that of the extensive free spins.  They are rewarded often and in generous amount. Just land between three and five Scatter symbols to be able to get your hands on 12 free spins. But this is not the only advantage!

Having triggered the free spins through the alignment of Scatter symbols, you will also have won yourself a significant payout, though the specific amount will depend on your initial wager. But you will win 50 times your initial bet. 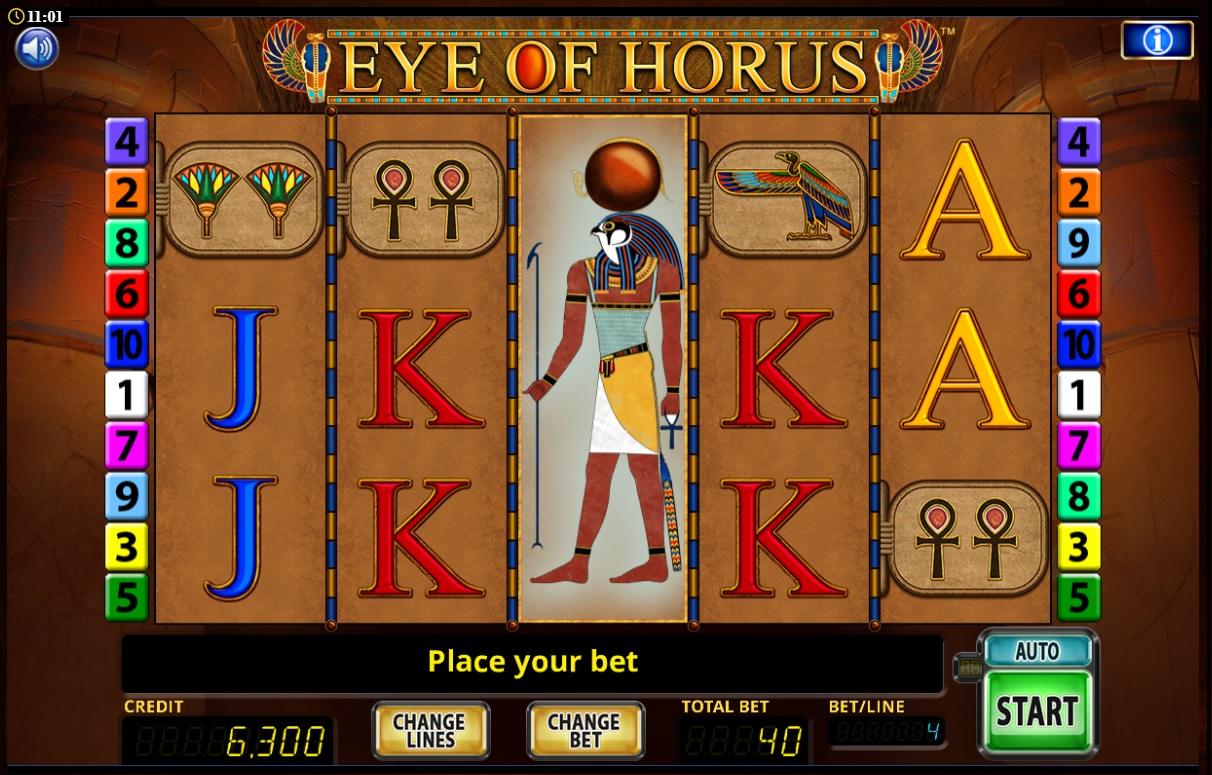 Reel Time Gaming a small Australian based games development company and though they may not be one of the biggest, they have certainly made quite an impact in the online gaming world.

With highly enticing themes, thorough research into the back story of each game, and high-end graphics, the games Reel Time Gaming create are always well received by gamers. Some of their most popular slots games to date all vary in their theme but have been played often by players on Thor Slots. Amongst all Reel Time Gaming slots, we prefer:

The Verdict on Eye of Horus Slots

For players who want to game on an Egyptian themed slots game, this is a great option. It marries the traditional approach of bricks and mortar casino style with the modern bonus features that we have all come to expect when playing slots online. This is a stylish slot with plenty to keep you occupied, though it does not have particularly in-depth graphics. But Eye of Horus game doesn’t need them because it has so much more to which will occupy any player.

Perfectly well suited whether you are an avid slots player or a first-timer, this is a really simple slot to get to grips with and has many different bonus features to enhance player enjoyment. The favourite bonus feature in this game is the free spins because they are plentiful and awarded often. But the fact that the Eye of Horus itself can reward players with a hefty sum, though dependent on their initial wager, is also very appealing.

For the more frequent slots player, the Gamble Feature is a welcome addition to this slot, as it makes the game more exciting for people with more experience or who are looking to enhance the excitement level. Still, if you prefer a different gameplay and experience, then try out Tree of Riches Slot.