All of your favourite fluffy characters are back for another go! Introducing Fluffy Too, which although its not a top Viking Slot Game, it is one that you should try on our site!

Summary of Fluffy Too Slot Game

For those that didn’t play the original, the Fluffy franchise is one that puts players right in the middle of a fairground, where they must match various cuddly toy symbols on the reels in order to come out on top with a variety of big cash prizes. This is a very simplistic franchise (and UK online slot) to grasp, compared to other slots out in the market who are clearly trying to leech off of the popularity of this slot. Fluffy Too is like Fluffy Favourites on steroids, which is a compliment trust us, simply play a few spins and see! If you would like to know more about Fluffy Too, then be sure to read the rest of this review. 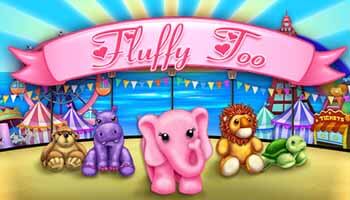 Expectation vs Reality when playing Fluffy Too

Fluffy Too had some very big shoes to fill. The original Fluffy Favourites is still played to this day, which sort of tells you everything you would need to know about this franchise. Developer Eyecon were extremely careful to create a slot that was very similar to the original, while at the same time not being afraid to try a few new additional features that add on to the original. Slots such as this one remind you what it was like to be a kid in the fairground, now that you’re a bit older you tend to be a bit more forgetful, which is why slots such as this are needed: for nostalgia!

Welcome back to the world of Fluffy Favourites in Fluffy Too. Again this is a 5 reel by 25 pay-line slot that grants players the chance to line their pockets full of cash while coming away from these reels with various cuddly toys. Players can spin here from as little as 25p per spin up to around £12.50, making it quite a varied slot for players of a variety of different entry levels. The best thing about this franchise happens to be the ability to play their slots on a variety of different devices, which include mobile, which allows one the ability to play this slot anywhere and at anytime which is perfect for those on the go.

The setting for this version of the slot is entirely different to that of the first, where players are on a beach promenade, rather than being in the middle of a field somewhere. Symbols are again matched from the left to right orientation, and most of the vibrant-coloured symbols make a return here also. Hippos, elephants, pandas, gorillas and many, many more fill out these reels once again. Each of these symbols reflect something different in terms of scores, making the more you match the higher your score!

The original Fluffy Favourites slot was full of additional features, the likes of which were incredibly experimental compared to other slots out there in the market at that time. A lot of these features you will find in this slot also. In-fact, the features here are somewhat identical, if not a tad different in order to keep things fresh.

WILDS: Pink elephant symbols act as Fluffy Favourites chosen wild symbol, matching these symbols will substitute various symbols on the reels for the scatter symbols, matching the wild will instantly grant one a 2x multiplier which will throw scores even higher up the pay-ladder. Matching upwards of 3 elephants will grant on free spins accordingly.

TOYBOX FEATURE: Landing 3 or more of the claw symbols (scatter symbols) will grant one access into the toy box feature. Once activated this feature will select 3 animal symbols at random, from there the player will be tasked with finding and matching them. Matching these symbols will grant up to a 100x multiplier to scores.

GAMBLE FEATURE: For those feeling lucky then you can risk it all and potentially make more returns but at the risk of losing all of it. After each successful spin will one be given the chance to guess the colour or suit of a card that is shown on screen. Guessing correctly will double that particular rounds winnings. Guessing incorrectly will take away the full amount earned on that round.

Fluffy Too is the perfect sequel to a very popular slot, and we would be remised if we didn’t suggest one play out this slot for themselves. Fluffy Too is a must play for any avid online slot player out there, and if you choose to skip this one then you must be crazy! You should also try out White Rabbit!

Other Games by Eyecon - the Developer of Fluffy Too Slot

Yes, the name Eyecon is a purposeful one, used to make you think iconic; which they generally are to be completely fair and honest. Eyecon are an Australian developer who have had their fare share of success stories in terms of big releases. Over the past few years the developer has gone above and beyond to create lasting experiences that leave players itching for more. Eyecon are indeed iconic, and for various reasons that would probably require its own review/article. If you are looking for a reputable developer who happen to show a clear drive and determination to succeed, then why not choose Eyecon? Players looking for more from the developer should definitely check out the following slots from Eyecon and try them out with our top online casino promotions: