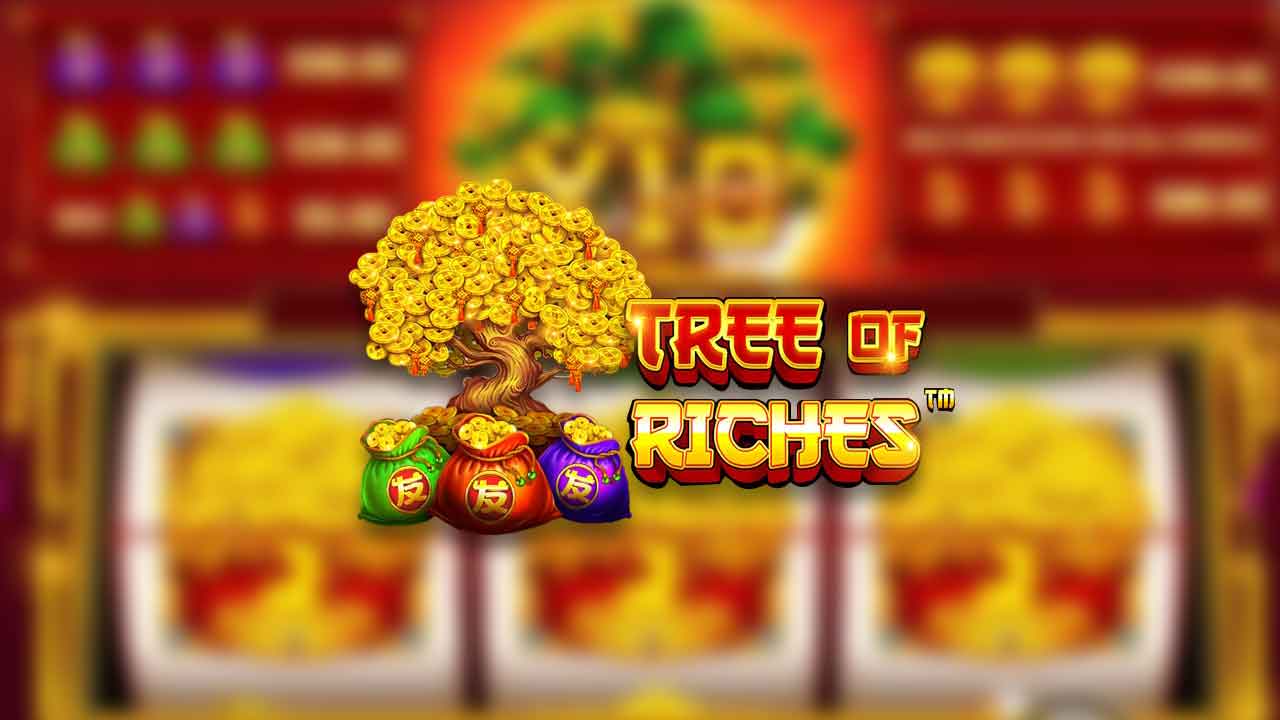 Review of the Tree of Riches Slot

The Tree of Riches online video slot that you can play here at Thor Slots a free.slots casino, which is still spanking new, is an attention grabber as it is dedicated to the famous mythical money tree from ancient Chinese culture.

The developers did a fantastic job combining the game’s cultural theme with a modern slot machine design giving it a somewhat exotic look. Even though a player will be staring at a classic title, the tree of riches has flawless graphics to make itself loved and also packs a couple of unique features.

Pragmatic Play is a name you must have come across if you are a lover of online slot games and new promotions. The game developer is known for making online video slots, scratch cards, table games, and video poker that has become increasingly in demand at UK online casinos.  The pragmatic play was Founded in South America and was initially known as 'TopGame'. The game developer started delivering its games primarily to the US, but it has grown with time and has now expanded and earned for itself an attractive reputation in the European gaming markets.

Pragmatic Play has gained some recognition in recent times, with the most recent being winning the 2017 Software Rising Star award during the EGR awards. Whereas in 2018, the developer bagged the Innovation in Slot Provision award also during the EGR award. The company presently has its office in Malta, which is an excellent choice of location as it moves closer to many of the regulated online casinos, which it has partnered with in recent years.

Other popular titles by the developer include:

With an excellent interface and the Feature of 3 reels with a single active line, the online slot called Tree of riches resembles a classic among the free slots games. We must also point out that it not only looks like a classic, but it also behaves like one for the most part.

It does come with some pretty exciting features, with its wild pumping in up to 10x multipliers, offering players the chance to grab up to 2,800x total bet ($140,000). The game also features an option to Re-spin Until You Win. If you consider that unique feature with the many others, it is beginning to look very good, especially since the game has the RTP at a level above average, 96.50%. 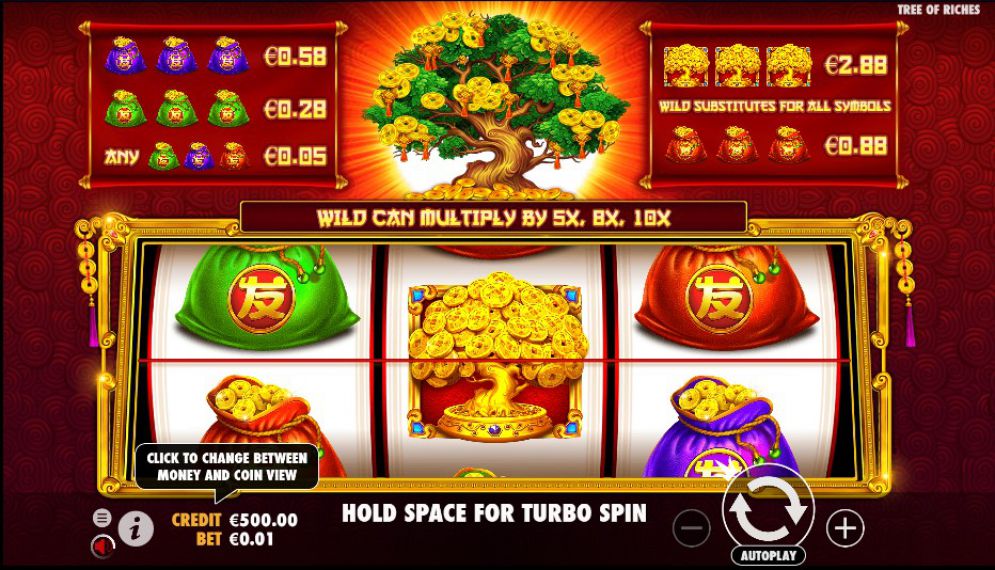 Even though the video slot has only 1 line for punters to bet on, the game’s wager system will utilize both coins and their denomination, in deciding how much money should be used for the spin about to be made. A player selects as many as ten coins for a wager, and then the player also chooses a coin value between $0.01 and $5. Once that is done, the game will then allow the player to play it with bets between $0.01 and $50 for a spin.

On their own, if you get combinations of three wilds, you can consider what to do best because they offer players up to $14,400. Though these are substitutes and they apply up to 10x multipliers to winnings, and for that reason, they can help to improve regular combinations far beyond that level. Also mentioned in the game is the possibility of wins of more than 2,800x, which would be interpreted to mean about $140,000 or more in cash.

Players will also be quite satisfied with the game’s Return to the Player. With an RTP of 96.50%, no one can look away.

This is the part where I must point out that if there is one thing that players should not be expecting from a 3-reel game, it is an endless list of features. But even so, you will find Tree of Riches's online slot to be a fantastic game, with many options that make your adrenalin pump and make the action enjoyable.

We start with the game’s wild symbol, which is the unique feature that it has on its paytable. Players will get the Money Tree with this symbol, which can function as a substitute in other combos, while also having the capability of creating its own. This wild is a blessing to many players as it offers Prizes of up to $14,400 when it shows up three times on the active pay line.

A crucial ability of this wild symbol is the part where it uses a multiplier on any combination that it helps to form. Attractive also is the value of the multiplier, as they are either 5x, 8x, or 10x.

If a player happens to land two of the wild on the active line, and a combination is not without form, then the player has triggered a re-spin. When this happens, only the third reel will re-spin, but them the re-spin will continue until the player gets a win.

The theme of the game, as I mentioned earlier, is inspired by popular Chinese culture and specifically by the money tree. You can see it in the game’s logo area and also spot in one of its symbols, the symbol of a tree that has gold coins instead of fruits, and more of them lying on the ground in huge piles. Apart from the wild, only three other symbols exist in the tree of riches video slot, with purple, red, or green bags that are filled with coins. Before you play this game, you can be confident that the design quality is excellent, and it is one of the outstanding Chinese 3-reel slot titles you will find right now. 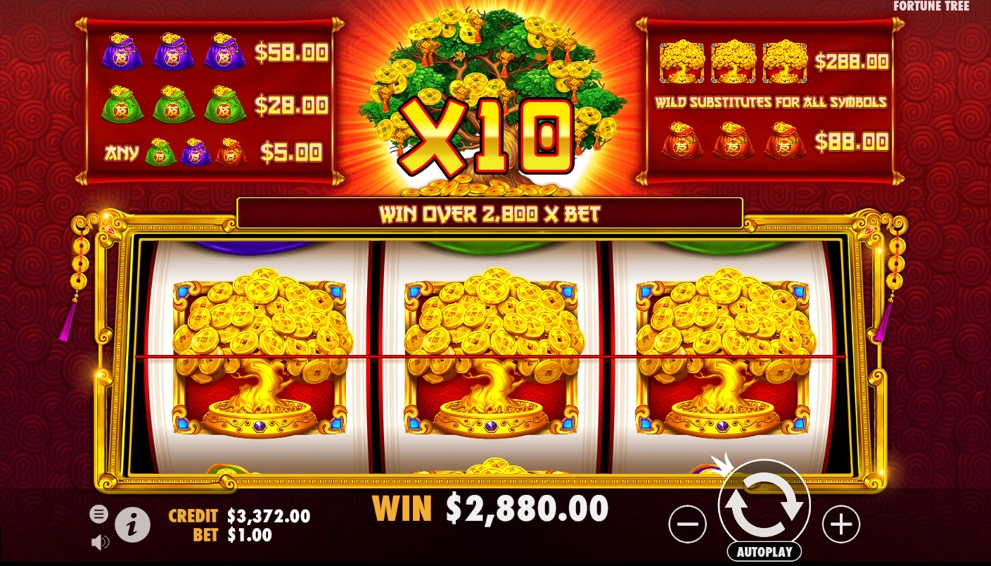 Last thoughts on the Tree of Riches - Hit or Miss?

The Tree of Riches online slots manages to appear very appealing, offering us useful features and impressive graphics. If you do not try it for any reason, when you consider its payout potential, you might have a re-think.

If you are hungry for more riches, riches that you can achieve by near endless means, then we strongly recommend you check out another classic, Rainbow Riches Megaways Slot, this time in Megaways format, so you just know there are more than enough ways to come out on top!