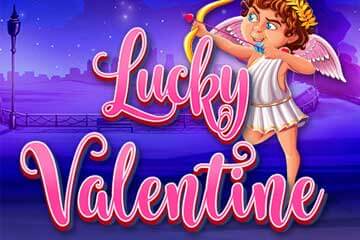 This is an online slots game filled with everything you would expect from a valentine style date. Clearly, there is love in the air with this French-themed slot filled with champagne, diamond rings, and…ice cream!

Instantly you will feel so much more empowered by life as you play free online slots like this because it brings so much joy, happiness, and excitement to the lives of its players which is probably the reason why it has been such a big hit.

The number of different bonus features will also have been responsible for the popularity of this game despite it being so young.

With multipliers that can be increased up to x20, lots of high-value symbols for you to look out for, Wilds of many different natures, the Tower Bonus, and plenty of free spins, it is all to play for in the game of Lucky Valentine.

Though pink does play a big part in slot promos game, purple and blue also feature heavily so it isn’t too girlie in its overall aesthetic. There is also always the chance of Cupid firing his arrow throughout this game and in real life too, depending on how lucky you really are. Play mobile casino slots like this one on Thor today!

Red Tiger may only have been around for the last six years, but they have made an almighty impact in that short time.

This is thanks to the team behind the development process because everyone who works at Red Tiger has had such vast and varied experience working in the gaming sector previously.

With members of the team onsite able to do anything required to help with the development of the latest game, Red Tiger really have found a winning portfolio and now have a sizeable portfolio to their name.

With licenses in four different jurisdictions, such as UK, Malta, Alderney, and Gibraltar, the footfall of players participating in Red Tiger slots games is ever on the increase. Winning awards left, right and centre for the high-end gaming experiences they achieve.

Red Tiger is now successfully partnered with many of the biggest and most well-known games in the online casino world, such as Paddy Power, Poker Stars, and William Hill.

The aim of Red Tiger is to create the best gaming experience possible for every single player who participates in one of their games.

Not only do they have high-end graphics and well-researched concepts for their games, but they also take a great deal of time to work out as to how they can improve the gamer experience of each game they create.

This is a real pro of playing Red Tiger games as they endlessly endeavor to increase gamer satisfaction and enjoyment levels.

Red Tiger released the Lucky Valentine slots game in February 2017 and since then it has won the Slot Rank Top 43 Award, as well as the Top 50 Golden Badge. This is a slot with a good variance level of 95.52% so wins can be expected fairly frequently.

Start placing your bets today from as little as 20p up to £500 per spin of the reel on this 5 reel, 20 payline slots game with a very loving theme.

A game based on Valentine’s Day and love in general, the theme of this game is set in France, or, more specifically, Paris: the city of love. With Cupid as the main character at your side, see if your luck is in as he fires his bow and hopefully helps you on your way to winning big.

With many different bonus features at your disposal, there are also plenty of free spins up for grabs and different ways in which you can increase your winnings through the use of multipliers and more. 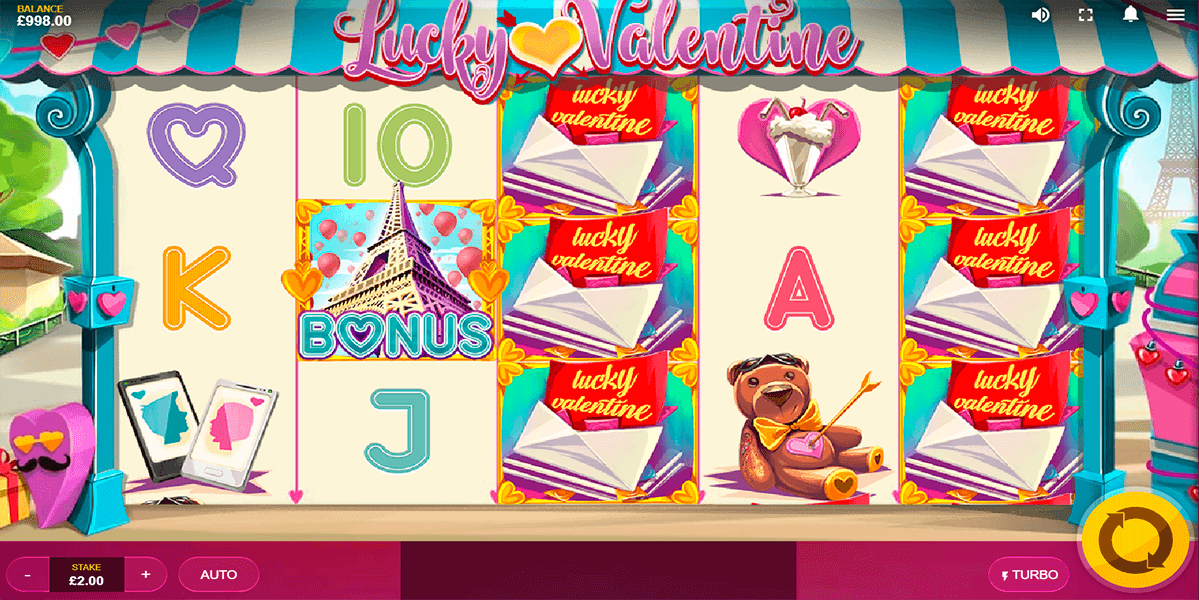 Three hearts will see you trigger the Free Spins feature, though the hearts do need to be on the odd-numbered reels. Once this bonus feature has been activated, click on one of the hearts to see how many free spins you have won.

A really exciting feature of this slot is the Tower Bonus feature, trigger via three bonus symbols. Once this has been activated, you are then on a fun trail to try and climb the tower and as you ascend, you will win ever-increasing cash prizes.

If you are fortunate enough to make it to the top of the tower then you can get your hands on 800 times your initial stake which can be an enormous bonus win.

There are also some randomly triggered bonus features for you to look out for as you play the slots game of Lucky Valentine, including Cupid’s Reels feature, Mega Wild feature, Love Bomb feature, and the Love Multiplier. Which will you trigger first and how much will you receive for your efforts?

The game of Lucky Valentine is great fun.  It rather cartoonesque in its graphics but it’s not too cheesy. The best part of this play slot games free is the number of different ways in which you can increase your winnings through all of the different bonus features available.

Though some are randomly triggered and some are triggered via specific alignments, it is all to play for in this game.

With huge multipliers up for grabs, you are always in with a chance of being able to increase your winnings as you play this game. But you need to have Cupid on your side in order to be able to do so.  Will Cupid fire his arrow and directly hit the target to help you trigger a bonus that you will love? Or will Cupid fire a near-miss leaving you feeling nothing but broken-hearted?

You might also find some luck when you play Golden Vault of the Pharaohs Slot today.