Twin Spin Deluxe is one of the many slot games with traditional fruit symbols designed stylishly with a touch of aesthetics. The base game has an appropriate, bright, and exquisite display of the symbols and reels, especially during the game's different features.

You could get to know more of this slot in the subsequent parts of this review and also find the best of free play slots on Thor Slots today.

NetEnt, a multiple award-smashing slot games entertainment company, is the software developer behind Twin Spin Deluxe. There is no gainsaying that the iGaming industry is incomplete without one or two games of NetEnt.

NetEnt is a game developer that started in 1996 under the company name of Net Entertainment but was changed later on to NetEnt. The company began fulltime operations in 2002, and since then, it has developed games that exceed any befitting description.

NetEnt is a gigantic name in the iGaming landscape and can be categorized as one of the vital instruments to its development up to this point. Little wonder why some casino analysts regard NetEnt as the highest-selling and most successful online gaming developer in the industry.

It prides itself as the very first company to develop the first online casino software – which, till today, has such a magnified prominence in the industry.

NetEnt has a progressive jackpot platform that is notable for paying all its winners, with all wins running into millions of Euros. Its revered position in the industry has continued to burgeon as it keeps developing quality software that adheres strictly to all demands of technology and innovation.

In recognition of its unparalleled feat, NetEnt has received an operating license to provide slot machines in Malta, Canada, the United Kingdom, and some parts of Latin America and Australasia.

Some of the free play slots by this developer are as follows:

You can play the above free slots and more on Thor Slots at any time. 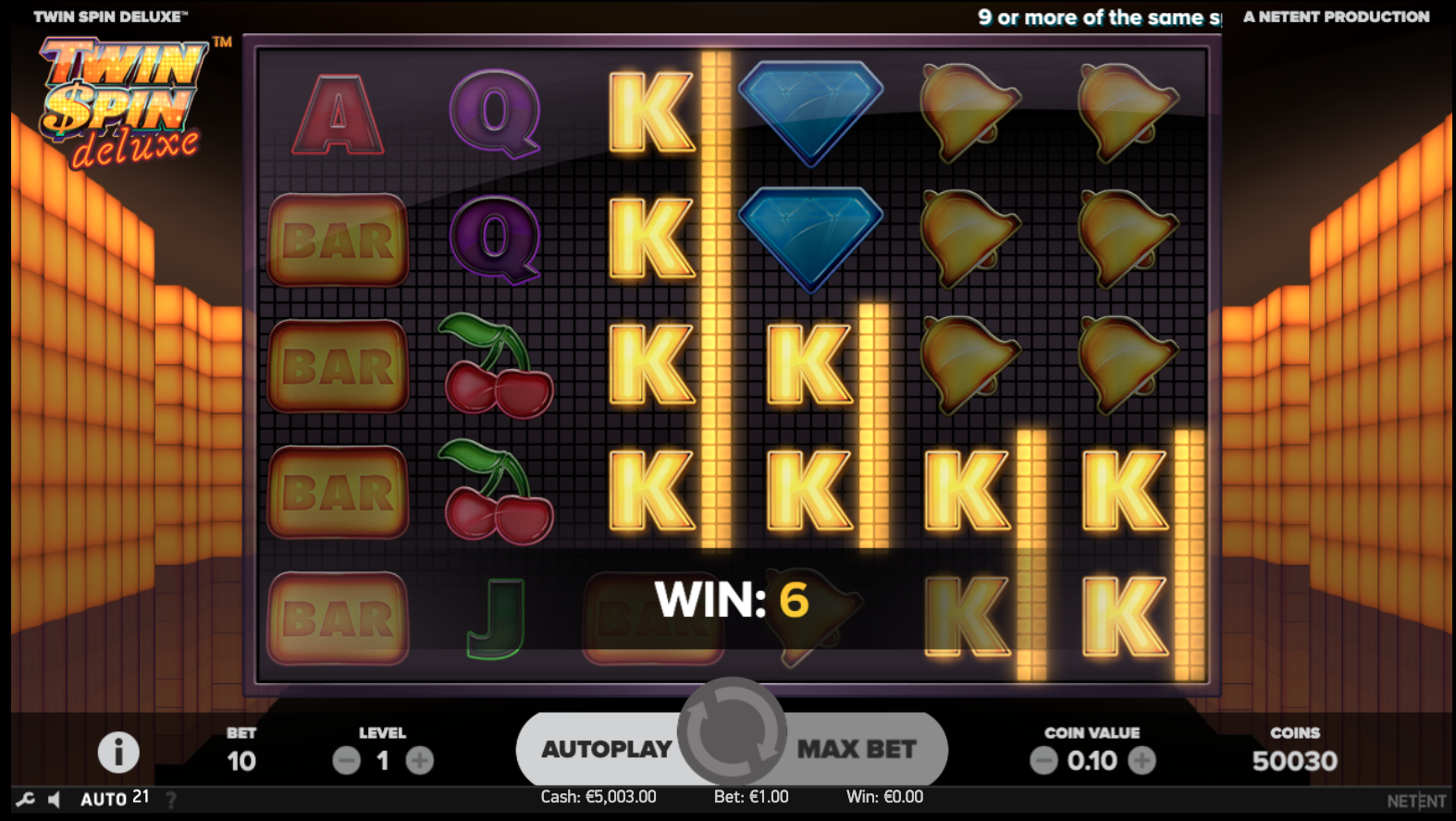 As already noted, Twin Spin Deluxe is one of the casino slots around with classic fruit theme vibe fused with a substantial touch of modernity. The game uses Clusters in place of pat-lines, meaning that they invariably form part of your gameplay.

The Cluster Pays feature comes alive when 9 and up to 30 symbols of a kind land horizontally or adjacently on the reels. The Twin Reels feature is all about 2 similar reels attached, both of which expand to 6 reels to accommodate all the symbols on the reels.

Prominent symbols include the Blue Diamond, Bars, Luck 7s, Cherries, and Bells, while the low-paying symbols are card suits such as A, J, K, and Q. There are no wild or scatter symbols here, and the wager is between 10 Pence and 100 Pounds a spin. More of the gameplay can be found on Thor Slots today. 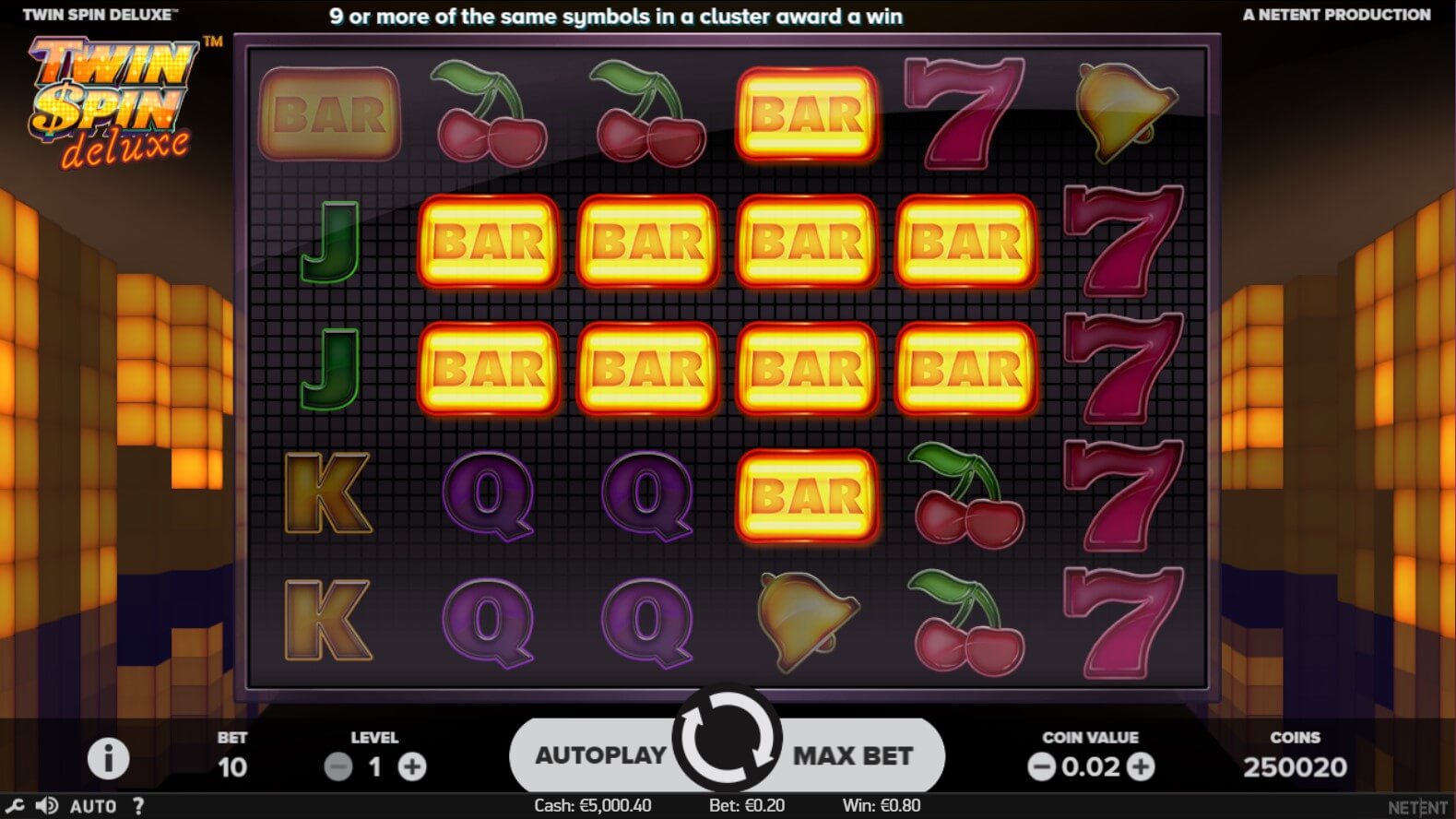 The Cluster Pays feature is activated by landing between 9 and 30 identical symbols on the reels. This will improve your winning potentials when they appear vertically or horizontally in the base game. When you get up to 30 Blue Diamond symbols on the reels, you are awarded the highest payout of 1,000 times your wager.

In this feature, 2 attached reels spin together with similar symbols on them. Further into the feature, all 6 reels come to play and accommodate all the symbols, offering multiple potentials for increased wins.

You can trigger the above bonuses when you play on Thor Slots and win handsomely now! 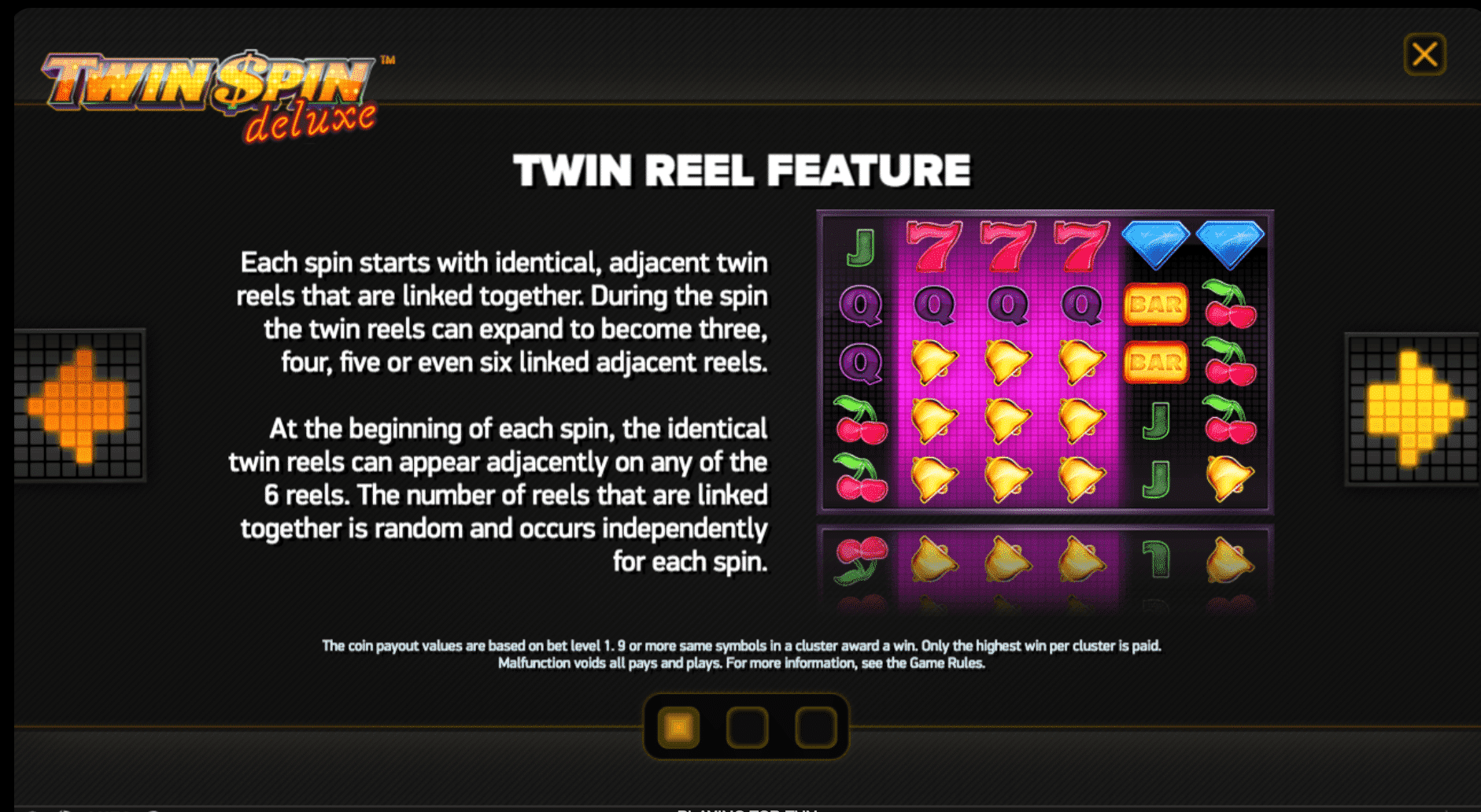 Twin Spin Deluxe has all the requisite graphic touch to have you glued to your screen. So, start spinning the reels now on Thor Slots and land enormous wins! You can also get some great wins from the Temple of Treasure MegaWays slot while you are here!