Sherlock: A Scandal in Bohemia

Slot Review of Sherlock: A Scandal in Bohemia Slots

Do you think you have what it takes to go undercover and keep out of the limelight of the paparazzi’s glare so that you can help the King of Bohemia to get back a compromising photograph that has been taken?

If you think that you are able to do this, then you could be up for the challenge of this pay by mobile slots game from the Tom Horn Gaming team available on the Thor Slots site. With multiple bonus features to activate, this medium volatility slot has many attributes that will keep every player happy as they play.

About Tom Horn Gaming – the Pioneers behind Sherlock: A Scandal in Bohemia Casino Game

Tom Horn Gaming have made it their mission to create the very best of free casino slots that they can for gamers of all abilities, wants, and needs so that everyone has something that they can look forward to playing on when they choose to do so.

They like to make slots and gaming experiences that are equally as rewarding as they are exciting to play for anyone who wants to participate and they are very well adept at doing so. They know how to have fun when gaming online because every member of the Tom Horn Gaming team loves to play online games just as much as they love to create them, so they really do know what they are doing.

With a wide range of slots games online and a varied portfolio to their name, they are a household name and are now an affiliated brand with some of the biggest and best online casino around the world including the Thor Slots site.

You can learn more on slot games features that can be found in this slot by continuing to read our Sherlock of London slot review. 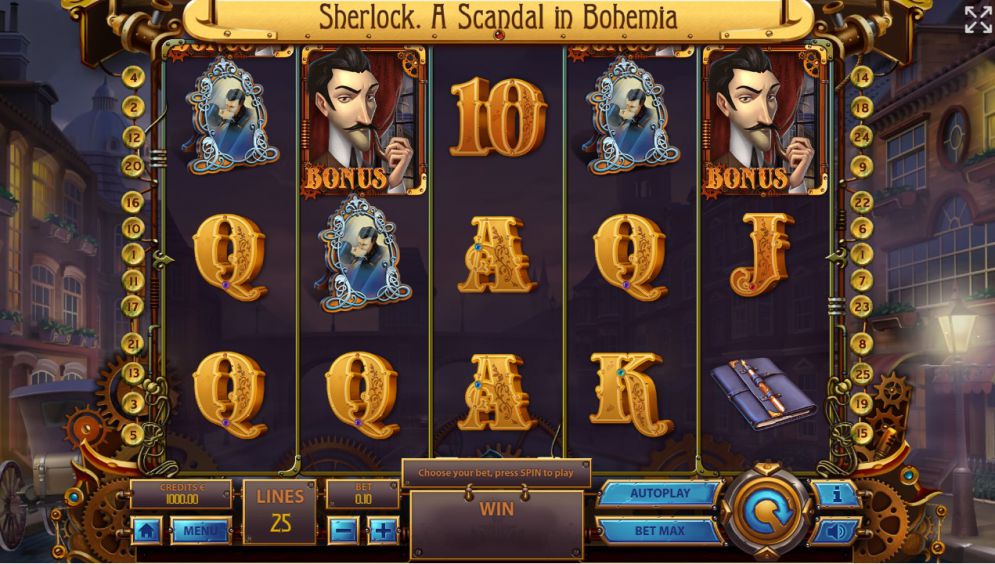 Sherlock: A Scandal in Bohemia Gameplay and Symbols

Tom Horn Gaming released the Sherlock: A Scandal in Bohemia slots online game in February 2019 as a medium variance slots game with an RTP of 96%. The maximum available jackpot for players to win is 2,500 coins and you are able to place your bets from as little as 10p per spin of the reels up to a maximum of £100 each spin.

This is a 5 reel, 25 payline video slots game with a steampunk theme for any player to enjoy and Sherlock Holmes is the key character of the game. There are multiple bonus features for you to aim to trigger along the way including the free spins, scatters, and the multiple bonus games where you can pick objects to see if you are in with a chance of winning a bonus prize. But do you have what it takes?

If you are looking for more bonuses, and you just love the story of Sherlock Holmes, why not give the Sherlock of London slot a try? 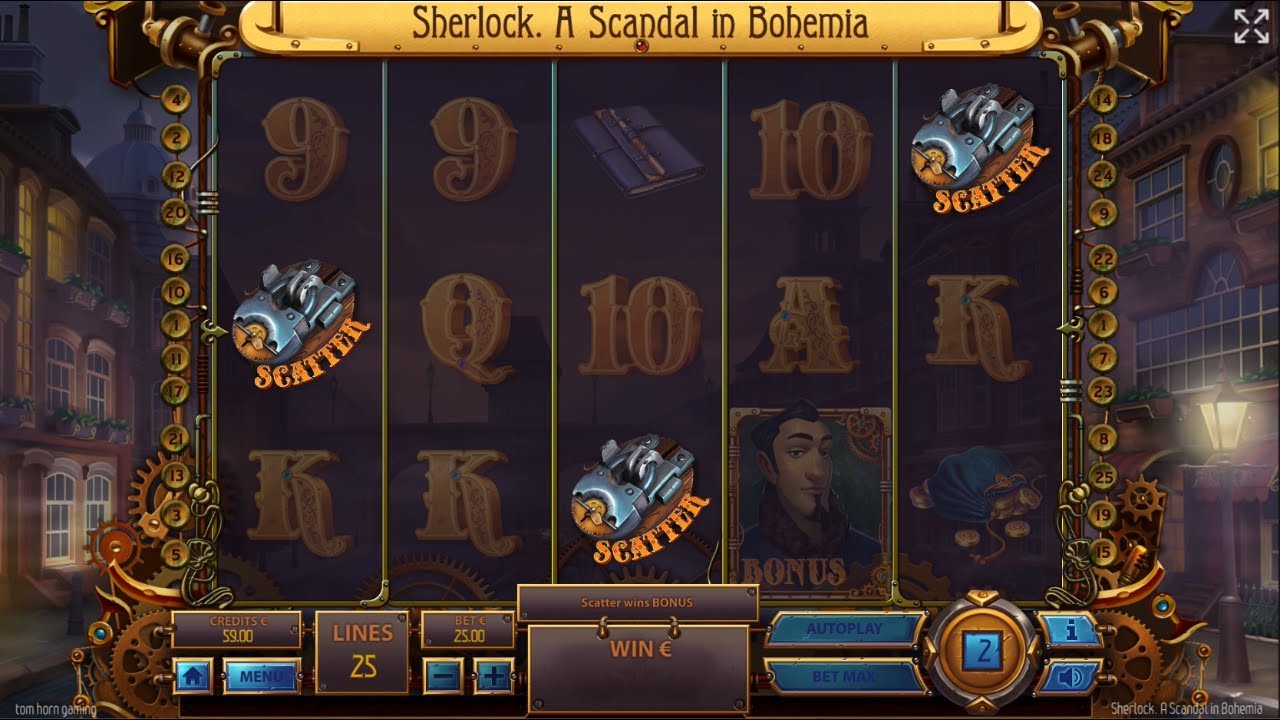 About the Free Spins and Extra Features

Sherlock, of course, if the scatter symbol in this slots game, so if you manage to land between 3 and 5 scatters, you will receive 10 to 20 free spins. There are no additional bonus features in play during your free spins so make the most of this feature as best you can but the free spins are generous and easy to trigger here.

There are two bonus games for you to look out for as you play too. Land 3 to 5 paparazzi symbols for one, four-level bonus game where you need to catch the paparazzi hiding in the bushes. Or land 3 to 5 newspaper symbols and see if you can reveal the compromising picture of the King of Bohemia that we are searching for during this slots online game as well as having the ability to win yourself 500 coins during this time too. 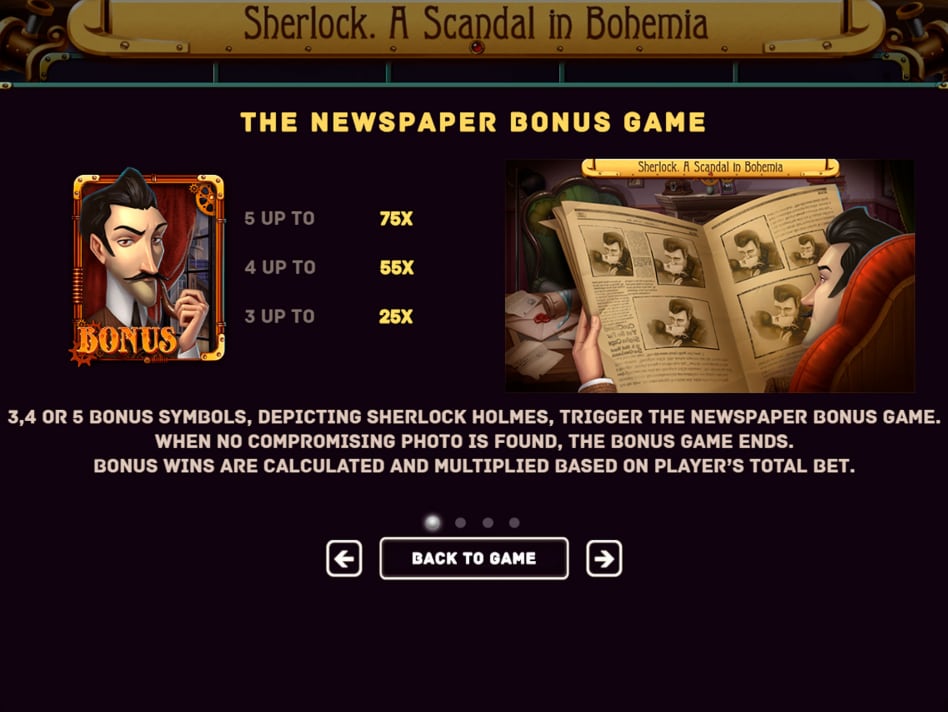 Last Thoughts on Sherlock: A Scandal in Bohemia Online Slot

This is a fun slot to play because you are solving a mystery at the same time as spinning the wheels in the hope that you are going to win yourself some cash prizes too.

Some players have been frustrated that there are not more bonus features available and that there is not a bigger jackpot but we don’t think that this holds the game back at all.

If you are looking for a Thor Slots game with plenty of action, adventure and mystery then Sherlock: A Scandal in Bohemia could be the answer. But if you’d like to try something else, why not give the reels of the Shaman's Dream Jackpot slot a spin?