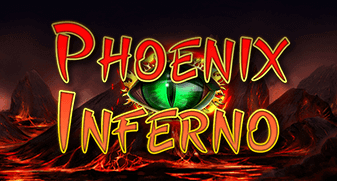 Phoenix Inferno is a free slots game based on the theme of mythological beasts from 1X2 Gaming. It has an RTP of 95% and a top prize of 7,500 coins. There is a really enjoyable bonus feature, and the slot also boasts excellent graphics and sound. This is a brand new slot games free online, released in April 2021, so you may not know much about it yet. Read on to discover what details I can tell you about the Phoenix Inferno slot!

Here are some facts and figures about the Phoenix Inferno slot game for slot fans who like to crunch the numbers before they try a slot. The RTP is quite low at just 95%, while the slot's medium to high volatility meant that I often had to wait a while for larger wins to spin in as smaller wins could sometimes be infrequent. I found that I could set my bet levels from 20p to £50 per spin. I never came close to winning the top prize of 7500 coins, though I did enjoy the extra spins feature with its expanding wilds. The action takes place on a 5X3 reel grid with 243 paylines, and the slot was released recently, having emerged in April 2021.

*All values are subject to change at anytime.

The Phoenix Inferno graphics look impressive, with the reels being set in front of a vivid orange-coloured volcano scene. A green eye adorns the game’s title, which is emblazoned in fiery letters above the reels. When the reels spin, the animation is very smooth and slick, and each symbol is impressively detailed.

The high-value symbols are all fiery characters or animals, so you’ll see a girl, a dragon, a lion and a tiger. The lower value symbols are the usual array of numbers and letters, while the phoenix is the wild symbol that can substitute for other symbols to create new winning combinations for you. The scatter symbols are the multi-coloured crystals, and I’ll tell you more about how they trigger the bonus feature later on.

If you’re having fun with Phoenix Inferno slot, why not try some similar titles at Thor Slots, such as:

When I played the Phoenix Inferno slot on my phone, I was impressed with how it looked. I could enjoy the same quality of fiery colours as I had seen earlier when I played the game on my laptop. The animation was just as smooth and slick, and I found the game immersive when played on a small screen.

Does the Phoenix Inferno Slot Have an Easy Gameplay?

The Phoenix Inferno slot is very easy to play if you follow the steps that I outline below. Even the most inexperienced of slots novices should be able to find the action very easy to follow.

Where Can I Play the Phoenix Inferno Slot Game?

Slots fans who want to try the Phoenix Inferno slot for themselves should first make sure that they have an account at a good online casino. I picked Thor Slots when I was choosing one. They have a great range of games, and you can open an account there by following these steps.

Are There Any Free Spins and Bonuses Available in the Phoenix Inferno Slot?

The Phoenix Inferno slot has great extra spins feature that 1X2, to which 1X2 have given some nice extra touches. Here are the details that you need!

When you land three or more crystal scatter symbols on the reels, you will trigger the extra spins feature. The number of spins that you receive depends on the number of scatters that appear on the reels.

My Personal Take on the Phoenix Inferno Slot

My rating for the Phoenix Inferno slot is 8/10, largely because of how much I enjoyed the bonus features. The game's graphics look good on large and small screens, with the fiery colours helping to immerse the player in action. The RTP of the slot may seem a little low, but the game's volatility ensured that I always felt that I was in with a chance of a big win somewhere along the line. I would recommend that you head over to Thor Slots and try the game for yourself today! You won’t regret it!

We also recommend one of the popular titles you can find at Thor Slots; check out Battle Maidens Cleopatra Slot Online.