A slot so epic, you’ll be seeing constellations for hours on end!

Space, the final frontier, and also the setting for the Mircogaming developed slot: Stardust. Have you ever wanting to explore the farthest reaches of space? Curiosity did kill the cat but imagine what one might discover out in space? We could guess and say that they might find gold, especially if they’re playing this slot as wins here tend to come fast and often which is essentially everything you would ever want in an online slot, especially one crafted by Microgaming who have quite the reputation for themselves. Stardust is a 5 reel by 40 pay-line slot that is chocked full of additional features for players to choose from in the heat of spinning around a supernova. If you want to learn more, follow this link.

There is a jackpot here of around 250 coins, available to players who wish to get the most out of this slot in terms of money, although we can guarantee there will be those playing this online slot for the sheer fun of it based on look and feel alone. Players can max bet at anytime making it very easy for them to get into the action without having to go through the time it takes to get everything sorted beforehand. If you still happen to be conflicted on Stardust then might we suggest you read on below, you might find that you that this is the slot for you in the process who knows!

Space-themed slots tend to focus on very bright and experimental colours in their slots due to the black backgrounds they often display. Yes, Stardust follows this trend, but the amount of slots that tend to wow us with what we see then let us down with gameplay is far too often. So going into Stardust we were expecting much of the same, although we were pleasantly surprised to find that Microgaming had decided to make a very satisfying slot in terms of gameplay. Stardust feels like what Asteroids might look like if it was released in the present-day, except with more attention being placed on what is on offer in terms of replay value; something Stardust masters in its own significant way. 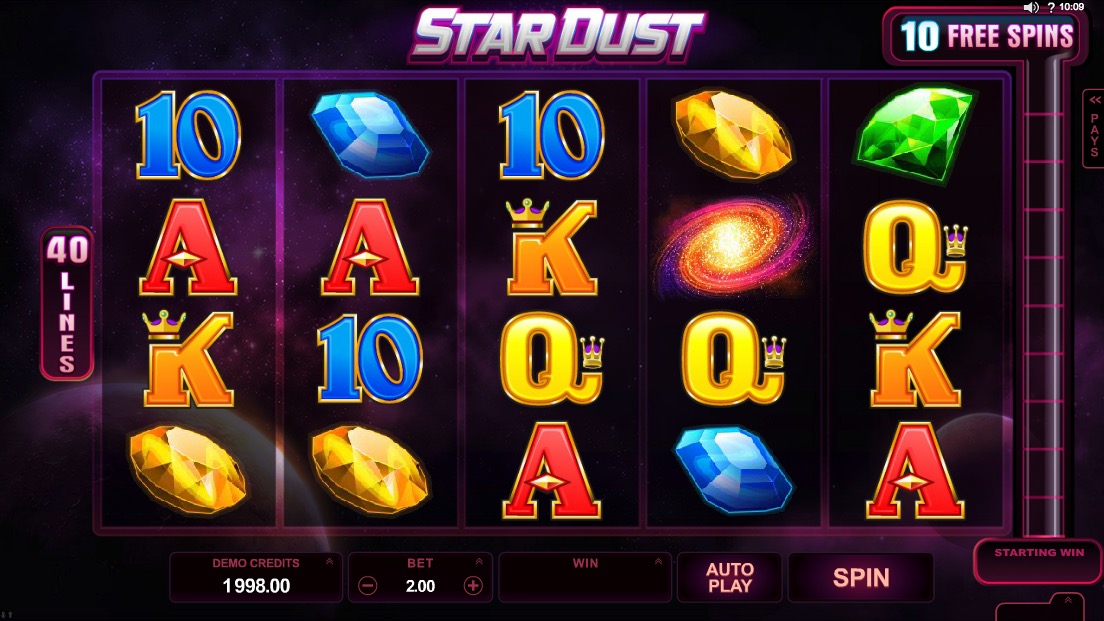 In order for one to begin this space adventure they will need to select their bet and coin amounts, this can be chosen at the bottom of the screen. Simply clicking on the plus and minus signs will increase/decrease the bet amounts depending on if you want it higher or lower. With slots like this you will want to be playing on amounts that you’re comfortable with. Don’t get cocky (kid) and try to rush into earning the most money on your first spin, a strategic stance will always lead to a more fruitful experience. Once you are happy with your offerings you then need only hit the spin button to watch as the engines of your ship begin to fire.

The look of Stardust is very well done. This is a very popular 3D slot from a very reputable developer, so we would expect no less. The purple reels reflect very well off of the spacey background and various coloured symbols found on the reels. Speaking of which, the reels are populated with a mixture of low and high value symbols. Low value symbols will help keep the wins rolling until your next big win. Higher value symbols come in the form of various jewels that reflect a different shape and colour. Each of these symbols will provide players with a different base score depending on how many of the symbols are within that ever-elusive winning pay-line. We suggest picking a favourite symbol and aiming to match that symbol with every spin. 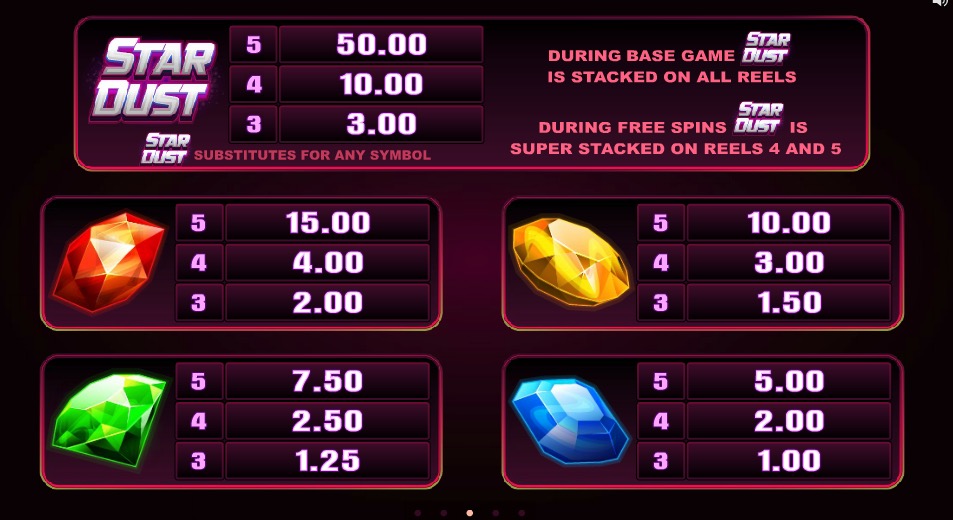 With the Microgaming tag being so present in this tag, one could only expect various additional features to run rampant across these reels, providing players with even more to get excited about. *Spoiler Alert* not only are there features here, but they are far-greater than ever imagined! Here are but a few featured in Stardust:

WILDS: Keep an eye out for the games logo, this symbol is the games chosen wild symbol. This symbol is special in that it will substitute each and every symbol on the reels aside from the scatter symbol which has the chance of putting more scatters on the board, thus increasing the chances of matching them. On reels 4 and 5 the wilds will stack, giving you a bigger potential for racking up big scores.

METER BUILD: On the right hand side of the screen players will see a meter. This meter will fill with every symbol matched on the third reel. Every time this bar fills, the player will earn 10 free spins accordingly.

AUTOPLAY: Self-explanatory: simply select how many games you wish to play in the background and for what amounts and the game will spin for you. This can be stopped at anytime. 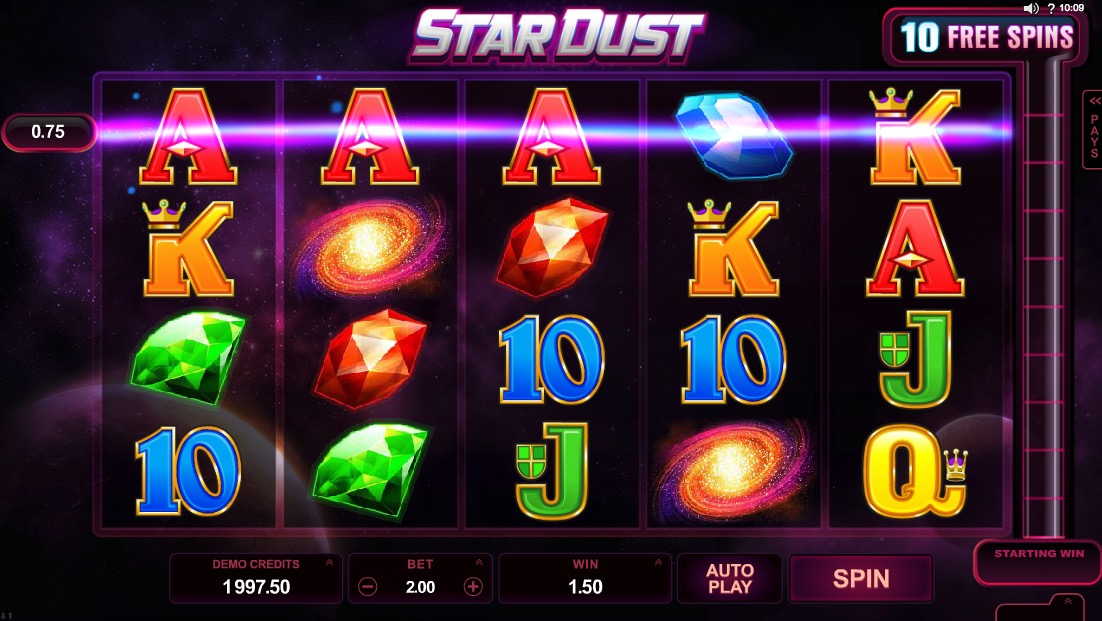 Stardust is an adventure that one could say is quite out of this world! The aesthetics here are only elevated by the gameplay here, and with gameplay being so smooth, it can be easy to see how players are so immersed that they’ve played this slot for hours on end. Stardust is most definitely a hit! You heard it here first. You may also like Mega Moolah!

Other Games by Microgaming

Established in 1994, developer Microgaming has all the characteristics of a game developer that is at the forefront of customer satisfaction. Microgaming are a dynasty at this point and they wouldnt be able to achieve that title without being able to act like a chameleon; changing with the times seamlessly with each and every online slot release. Most developers only have a life span of around 2 years at most if they fall behind, Microgaming have more than stood the test of time and will be around for a lot longer if their track record of slots are anything to go by. Slots in the Mircrogaming catalogue include: