Sam on the Beach

Sam on the Beach is a 5 reel and 243 ways to win free play slots by ELK Studios. It’s one of the games you can try on free slots casino Thor Slots. The theme is based on Sam of Electric Sam taking his family on vacation. Some of the bonuses you can enjoy in the game include; free spins, multipliers, stacked wilds, sticky wilds, symbol substitutions, re-spins, etc.

Players will receive up to 15 free spins in the free spins feature and can retrigger the feature. Sticky wilds appearing as Sam’s family members can land stacked on the reels in the Re-spins feature.

There’s also a chance to win increasing multipliers in the game. Stakes in the game start from 20p to £100 a spin on all iOS and Android tablet, smartphone and PC devices. Sign up today to check out more slots at Thor Slots.

ELK Studios – The Developer of This Casino Slot

ELK Studios is an online casino software company based in Sweden. They’re a new company when compared to other developers like Microgaming, NetEnt, etc. However, this casino game developer is on the rise. Their mission is to release high quality games.

They are not trying to release a lot of deposit by phone slots games fast, but rather take their time to make good games. This is why their collection is still limited, but it is growing fast. 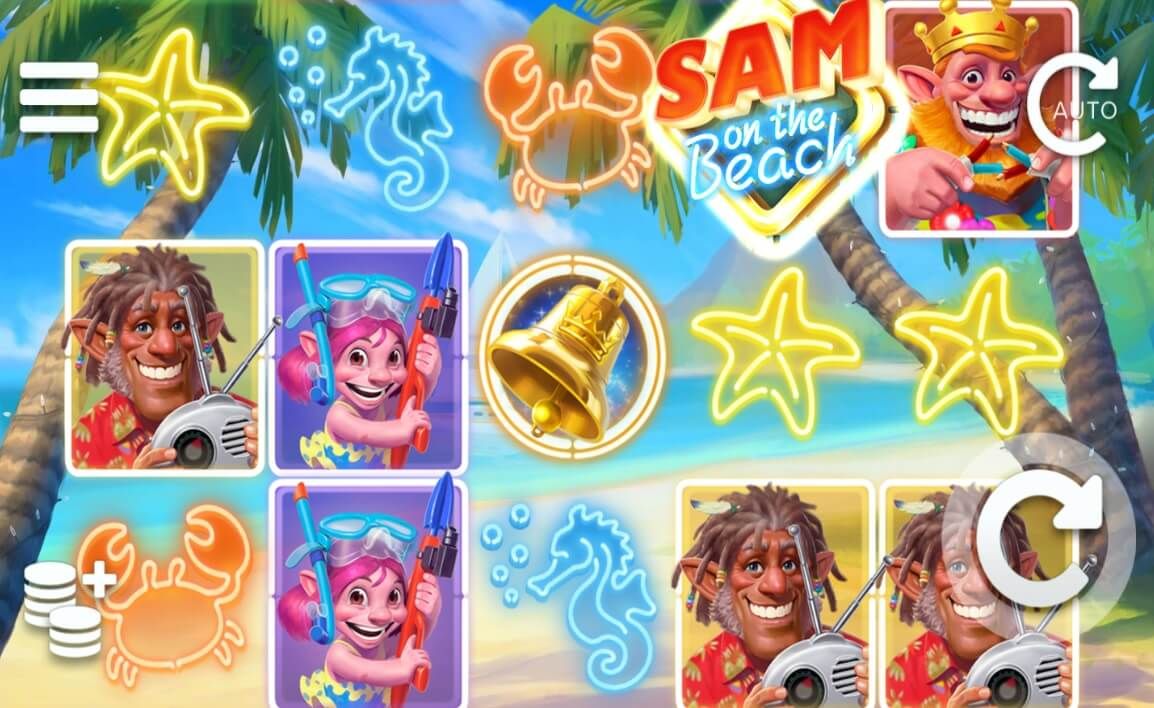 Sam on the Beach is now ready to play on free slots online casino Thor Slots. Sam is itching for a getaway and is prepared to take his family to the islands of the Caribbean. If Sam looks familiar, it is because you’ve seen him in Electric Sam, a 2014 ELK Studios’ release. The beach is the backdrop for all the action - blue skies and palms offer an idyllic space for spinning each round.

Symbols on the reels include a variety of sea creatures like sea stars, seahorses and crabs all made to look neon. There’s also bell symbols and members of Sam’s family appearing on the reels including Sam’s wife Sandra, his daughter Maggie, Sam himself and this time an appearance from Sam’s older brother Ted. The Caribbean party island soundtrack will have you ready for a party. 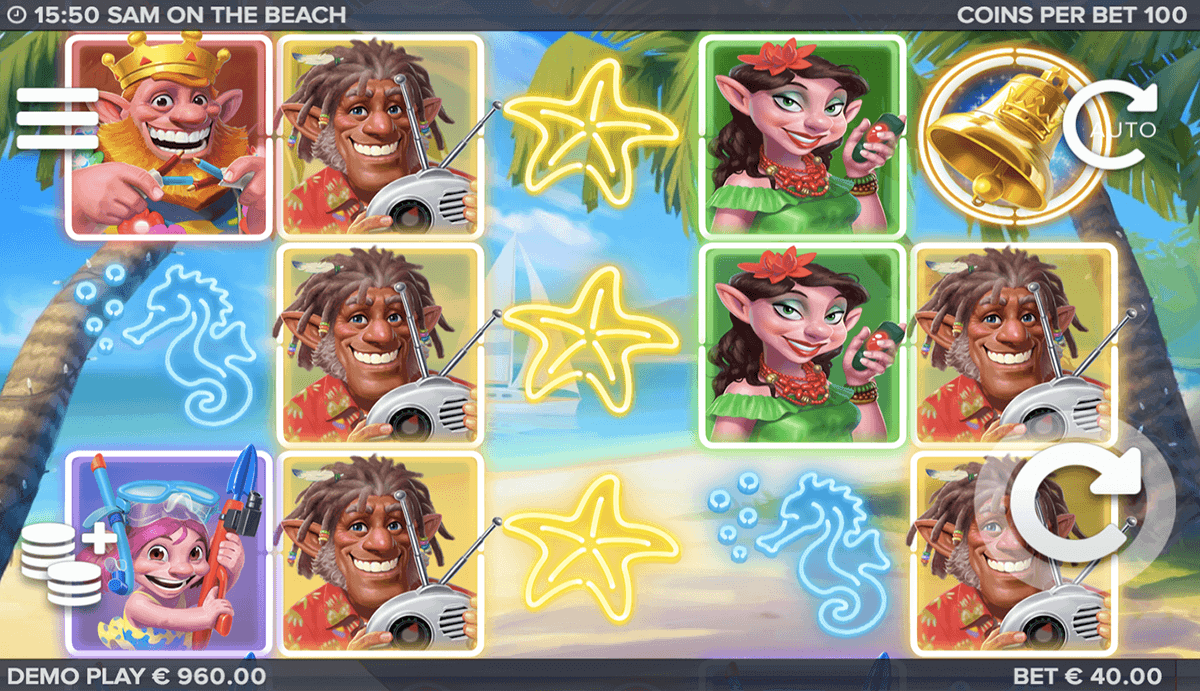 Bonus Features in Sam on the Beach

Thor Slots has a comprehensive list of real money slots and free slots. Sam on the Beach has got some exciting bonus features in store for players. Much like its sibling slot Electric Sam did. Check out what Sam has in store for you below.

- Sticky Wild – Sam will land on the reels during this feature and award sticky wilds.

- Bonus Multiplier – when Sandra appears, she shoots the multiplier from 1x to 10x.

- Imploding Symbols – Maggie will land on the reels and clear away any low value symbols on there. 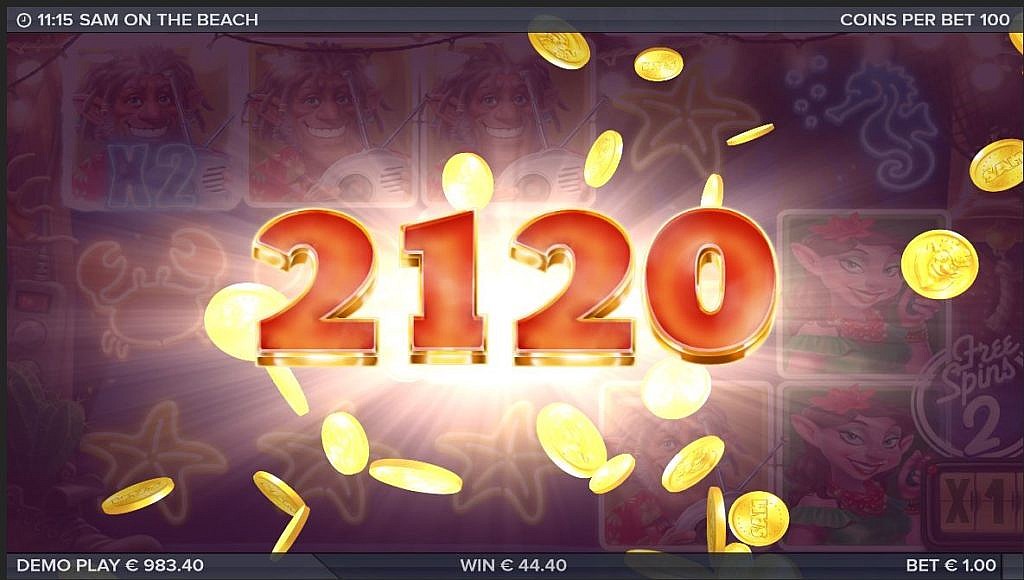 Our Verdict on Sam on the Beach Slot

Sam on the Beach is one of the slots you can play for real money or free slots on Thor Slots. If you loved the first slot, you will definitely enjoy this sequel. The theme is just as entertaining and the visuals are top notch too. The bonus features in the game include; the Re-spin feature that includes free spins sticky wilds landing throughout.

The Free Spins feature is where there’s a lot of potential to win from the Electric Treats. You’ll need to keep your fingers crossed to land the 10x multiplier. Sam on the Beach has a middle to high variance where the highest wins possible can go over 2,200x your total bet. For more great slots, check out the Rolling Stone Age slot.