Pragmatic Play is one of the online slot developers that give customers exactly what they expect. Recently, the game provider has pumped up its repertoire of content with one strong title after another - but Pirate Gold, in particular, stands out and is often ranked amongst the best slots to play in 2021.

Judging by a first impression, it is evident that Pirate Gold is no exception to this unique rule. Though many of you may be a bit bored of the pirate-themed slots, you can rest assured that Pirate Gold stands alone as a blockbuster among the best play for fun free slots with all the right ingredients.

This video slot is characterized by breathtaking pomp, graphics, and splendor, as well as plenty of features like fixed jackpots, the Lucky Treasure Bag feature, and a Free Spins feature that comes with extra wilds.

Pirate Gold online slot is a 5-reel, 4-row game with 40 fixed pay lines and can be played on all smart devices from as little as £0.40 to £200 per spin. Pirate Gold slot volatility is high, as it comes in at 5 out of 5 on the Pragmatic Play scale, so you may want to keep this in mind before you play for real money on Thor Slots.

Visually, no one can argue the fact that Pirate Gold is has one of the more exciting appearances for a slot. It feature a catchy mix of cartoon-style and photorealism graphics that comes together pretty well.

The games' theme is set in a misty harbour and features pirate ships docked on both sides of the reel set. Looking at the backdrop, you will see how the waves move, as well as a lovely sunset and some mountains in the far horizon.

Pirate Gold actual reels are set in a wooden frame that has an info bar positioned at the top and also has the fixed jackpot prizes showing just below. Also, lovely are the lanterns gently swaying in virtual the wind. When the scene changes to the stormy naval battlefield once you enter the free spins, it is interesting how the lamps stay unaffected.

With a look at the Pirate Gold slots paytable, you will find precisely 10 standard symbols. These symbols include gold and silver coins, bronze, a hook hand, a ship, a telescope, a treasure map, and a parrot. The game's most rewarding symbols are the pirates, both male and female.

These folks both offer players 12.5 times their stake when a player lands 5 of a kind. On the player's side, Pirate Gold also has the chest wild, which replaces all symbols except the scatter. However, you must note that the wild is omitted from reel 1.

The slot game has two features, which turn Pirate Gold into one of the most rewarding slots in 2021. Check what each has to offer below.

There is a Lucky Treasure Bag feature, which is mainly a streak re-spin feature and is activated if you have 8 or more money bags simultaneously hit on the same spin. All the money bags displayed in the spin responsible for triggering the feature will be locked in place as 3 re-spins are played. While the re-spins are on, players will only notice blanks, some additional money bags, and some multiplier bags or a re-spin chest symbol.

Now, if a player lands a money bag as they play Pirate Gold, the game's re-spins counter will reset to 3. Also, if a player lands a re-trigger symbol, he will be awarded a new Lucky Treasure Bag round, which will be played after the first round has been completed with the beginning money symbols grid remaining the same as in the initial round.

Multipliers during the Bonus in Pirate Gold 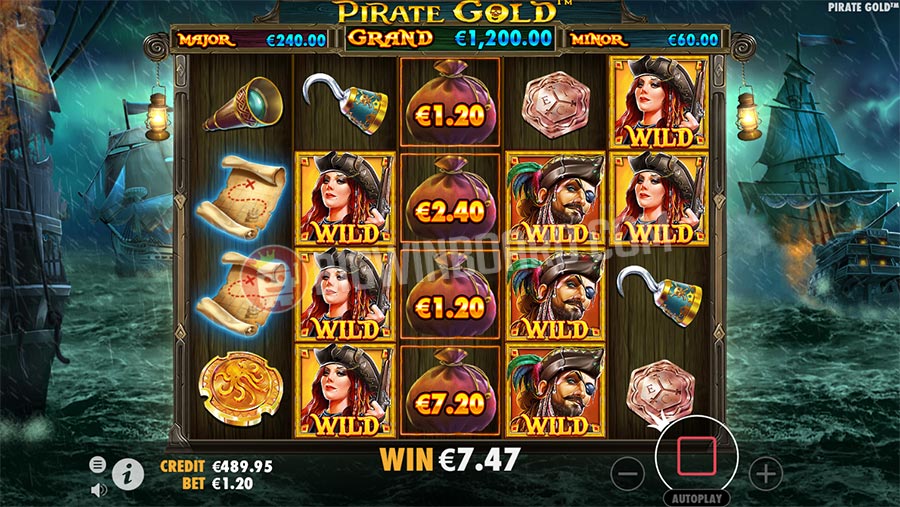 There is also a Free Spin feature in Pirate Gold that will activate if a player lands 3 compass scatters at the same time anywhere on the reels. Beginning with 10 free spins, here, a player will benefit from a few extra wilds as both the female and male pirates change to wilds if they show up on all reels but the first. It's also possible for players to re-trigger this feature by getting 3 scatters.

These bonus features is not just your standard type, which in many slots usually functions as a "filler" to make sure players stay entertained. The Pirate Gold  bonus features come with a maximum win of a whopping 32,270 times the player's stake, so there is no need to roll your eyes when it activates.

Lastly, Pirate Gold slot game has 3 fixed Jackpots to offer during the bonus feature. The jackpots are the Minor (50x), the Major (200x), and the Grand (1000x) your bet amount if you are lucky enough to fill up all of the 20 positions with money bags. Fascinating right?

Pragmatic Play is a game provider based in Malta and has its offices in India, the UK, Ukraine, and the Philippines. This comany remains one of the fastest growing online slot providers with a significant focus on desktop and mobile digital slots. Pragmatic Play boasts of games in 16 different languages and offers more than 180 different online slots and more than 80 mobile/tablet friendly slot games!

Thor Slots feautres all the new gaming titles released by Pragmatic Play, which are added on our platform every month. The most popular amongst these include: 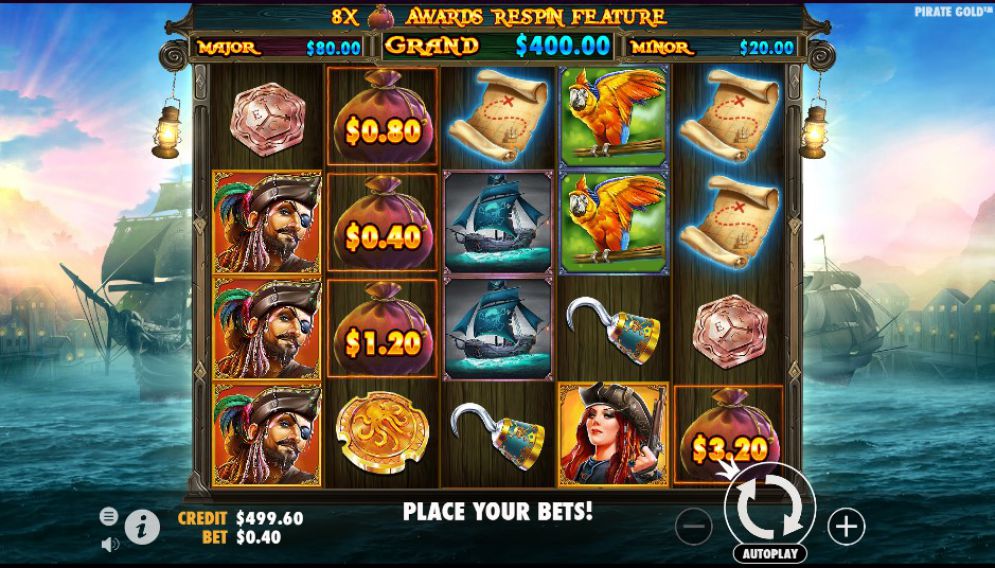 Many people have lost their life's work on the pirate-infested waters, but not you. This is one slot game that might change the weight of your account balance for good. With luck on your side and the willingness to take on the reels, you can grab the offer of 32000x your stake with Pirate Gold.

There is almost nothing to hate about this Pragmatic Play offering. The graphics are excellent, great potential for big wins, and many entertaining features — all of these work in sync to bring you thrills and excitement.

And if you are looking for more entertaining features, why not have a look at what Madame Destiny slot has to offer!