Ivan not the fool 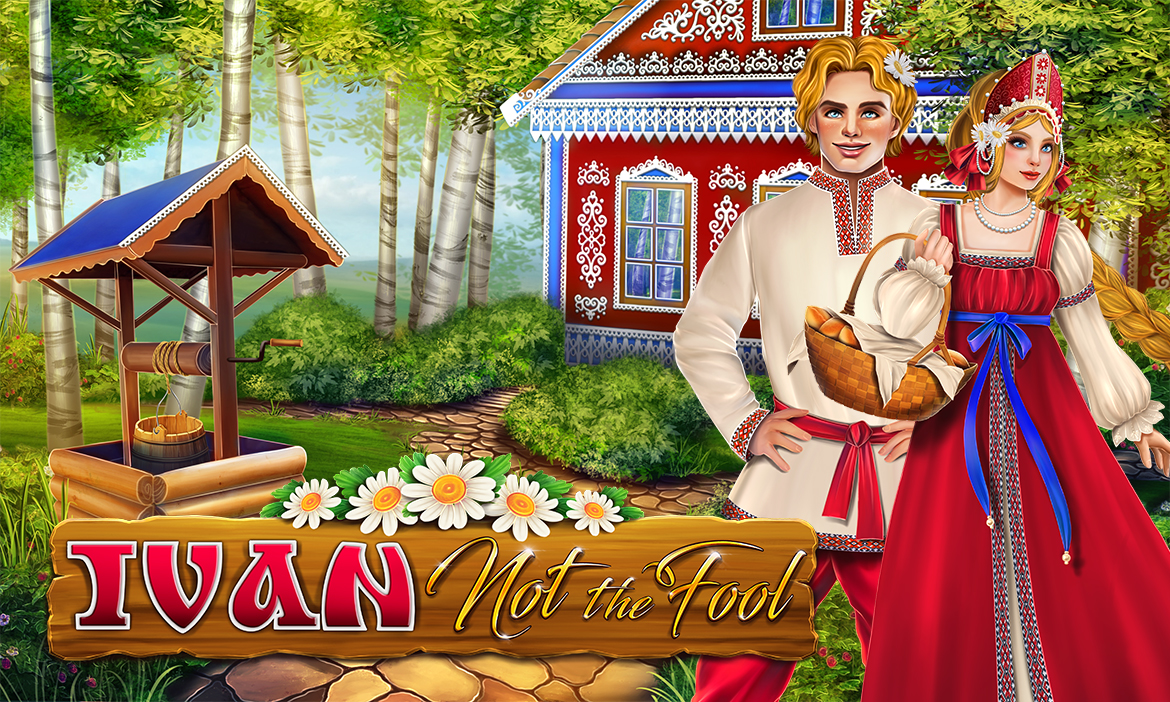 Visually this is a bit of a interesting slots free play game. The background is honestly like a genuine piece of art work, the greenery blends beautifully with each other, smooth transitions between this natural colour palette with detailed structures, the traditional looking house has been crafted to spare no expense – it truly looks magnificent, as does the board and the symbols the board carries.

The food symbols we will see look incredibly tasty, making us hope to win them just at the thought of how satiating they could be.

All of this goodness being said, the actual main characters seem like a rush job, the clothes and footwear at a great standard, but there is an odd melted doll appearance to the faces of these characters. This pulls us out of the world we are presented with, particularly because it is in such stark contrast to the rest of the magnificently crafted free slot games.

Ivan Not the Fool Developer - ReelNRG

ReelNRG are a great developer who focus on creating top of the line experiences for both online and mobile casino games.

If you liked the Ivan Not the Fool slot then you’ll love these games: 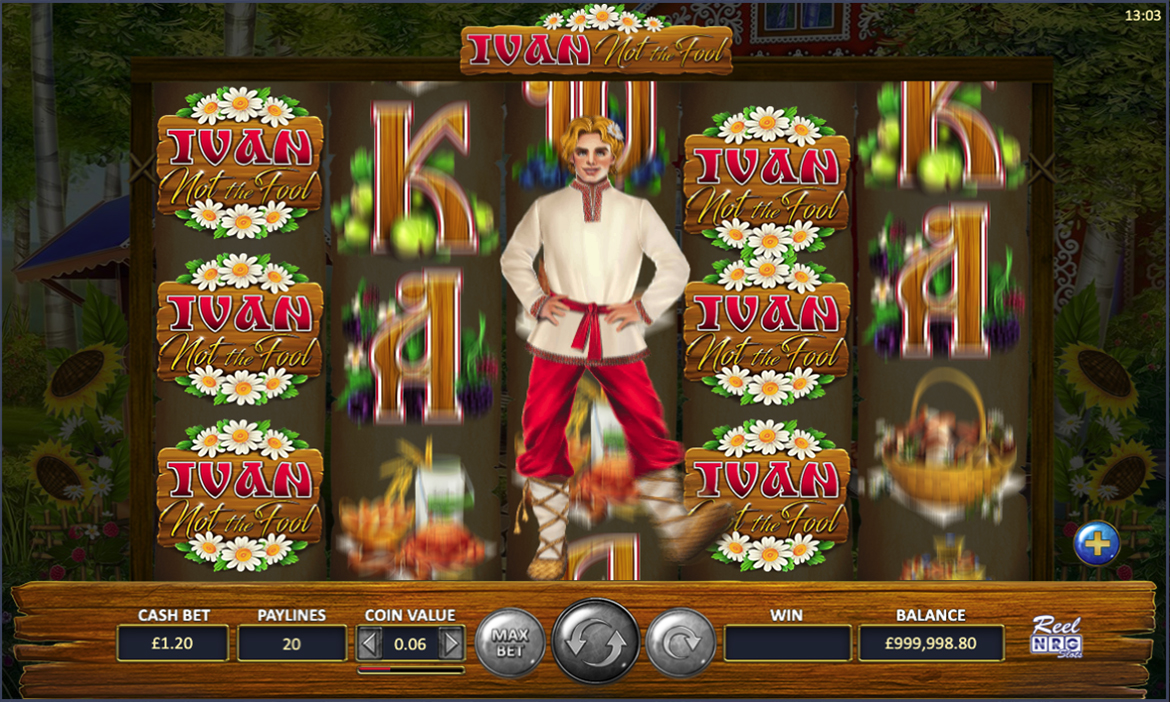 The main symbols in this game come in as a set of 10 the higher value ones are traditional foods and items such as a wicker basket filled with wild, freshly picked mushrooms, jugs to carry water or milk in, Coffees and a glistening golden pot to store the rest of the coffee in, and finally an assortment of breads. The lower value symbols that we are accustomed to seeing at the higher value of a deck of cards.

This slot game has 5 Reels and 3 Rows being the usually expected amount for standard slot games. With this 5x3 grid we are given 20 Paylines to take advantage of. This comes together with all the bonus features we will get into soon to bring us an RTP of 95.93% which is a little lower than we would usually expect, but only by a hair, so try not to let it put you off from getting involved!

The betting range is fairly decent too, though it seems to be fairly obvious that this game is aimed at pay by phone casinos as it ranges from a min bets of £0.20 to a max bet of £60 this means it is not hugely over the daily cap of £30 for mobile deposits.

The scatter symbols in this game are represented by a little cute, white goat with a shining bell huge around its neck and what appears to be a little daisy in its mouth. Whilst being very pretty, they are fundamental in unlocking free spin round, which we will get into soon. 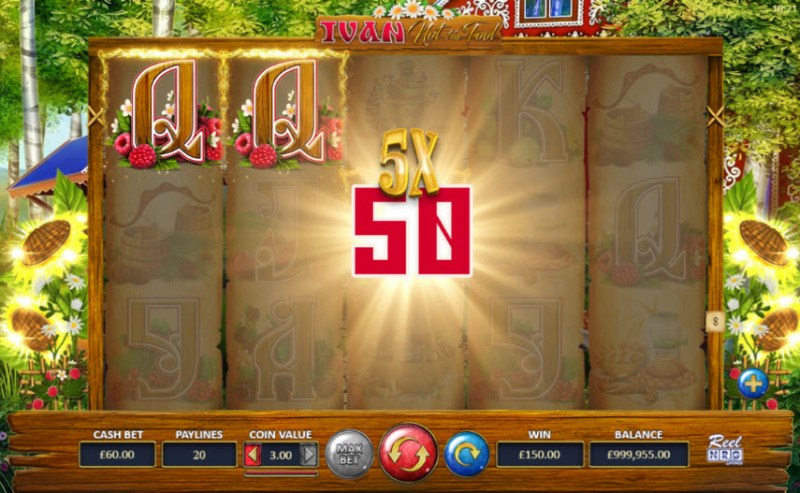 The bonus features in Ivan Not The Fool are seamlessly integrated into the gameplay with random features keeping us on the edge of our seat, expectantly waiting for what they have to offer.

Much like the aforementioned multiplier, this bonus feature too is given to us on whim. Ivan, the lead character in this slot game will appear randomly giving us stacked wilds which will pop into place as we are given the treat of being able to see his little jig.

The super sild feature triggers when the super wild symbol lands in the boxes in the middle of reels 2 and 4. If only one lands in place, 2-5 wilds are awarded. If it lands on both then we get 5-9. 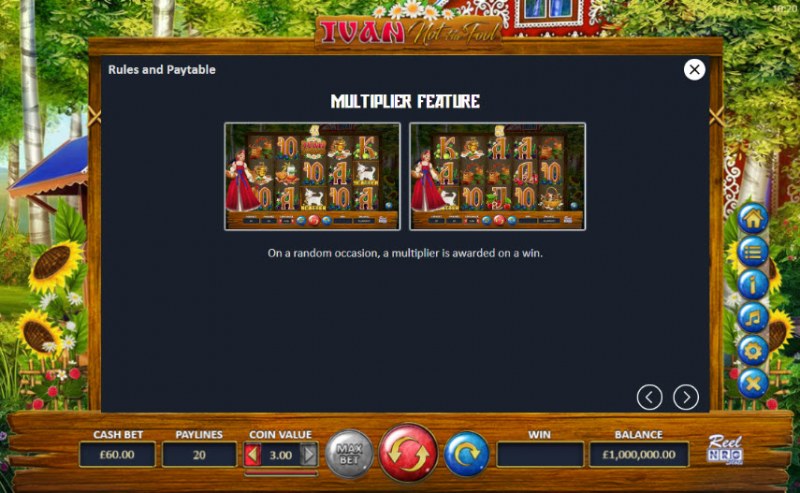 Our Verdict on Ivan Not the Fool Slots

This slot is a fluid experience with good features though it would be nice to see some more work done on the graphics of the characters, for this we give it a 6/10.

If you are looking for something with a more upbeat theme, then we strongly recommend the adorable Fluffy Favourites Slingo slot.