Venture if you dare, into the dark woods to discover riches hidden at Castle Blackspin. The castle had been abandoned centuries prior due to eerie occurrences. The only person brave enough to scavenge through the castle for hidden treasures is the mighty black knight.

This online slot game is based on fantasy, mystery, and a whole lot of adventure. With an RTP value of 98.0% and MED volatility, the statistics seem promising, not to mention the wide bet range between £0.10- £20, and of course the jackpot prize of £1000.

The online gambling industry hasn't slowed down since the world's first online free slots games release. If anything, slot game developers are constantly thinking of new and innovative ways to make their games stand out.

Scientific Gaming is an American-based technology group that has created an attractive portfolio for itself in the world of online gambling. The company, however, is known to acquire smaller software companies and then develop casino games under their brand name.

Why is this information important? Mighty Black Knight is a slot game developed by Scientific Gaming with attributes similar to Barcrest Gaming and Williams Interactive (WMS) - companies that Scientific Gaming has acquired.

Mighty Black Knight has an above-average RTP value of 98.0% and MED volatility. The game has impressive statistics compared to other online slot games. RTP values indicate the number of returns a player can win while gambling and volatility refers to the frequency of wins they're expected to land.

More information on Mighty Black Knight is listed down below:

*All values mentioned in this table are subject to change at any time.

While I’m not one to focus primarily on a slot game’s graphics, I will admit that sometimes good graphics can redeem a seemingly poorly executed slot game. In the case of Mighty Black Knight, it’s pretty much reversed.

The online slot game has reasonable statistics and a decent jackpot prize. However, the graphics are constantly glitching. The quality is worse on mobile phones. This issue, sadly, isn't new. This is something that is seen throughout Scientific Gaming's slot games - or at least in a majority of their releases.

Keeping the quality of the graphics aside, Mighty Black Knight features 5 reels and 9 rows. The makeshift slots are displayed against a dark and eerie castle in the background. Scientific Gaming developed an eerie soundtrack to fit well with the overall theme of Mighty Black Knight.

As Barcrest Gaming is one of the developers that helped create the Might Black Knight slot, you may also like these other titles at Thor Slots:

Mighty Black Knight is available to play on both desktop and mobile versions. Although, I will admit that the quality of the graphics isn’t all that great in the mobile versions.

However, if you want to give the game a fair shot, head on over to Thor Slots. The online casino features over 600 slot games from 25 developers, has mobile phone compatibility and is licensed by the UKGC.

Does Mighty Black Knight slot have an easy Gameplay?

Lastly, if punters bet £50, the royal symbols are removed, and the reels carry on being stacked until a punter lands a winning combination. Basically, all 100 paylines are activated.

What separates an exceptional slot game from an ordinary one is the number of in-game bonuses it contains. Mighty Black Knight has a fair share of features, such as multipliers, jackpots, and free spins.

During this feature round, the RTP value of the game is set to its highest value of 98%. 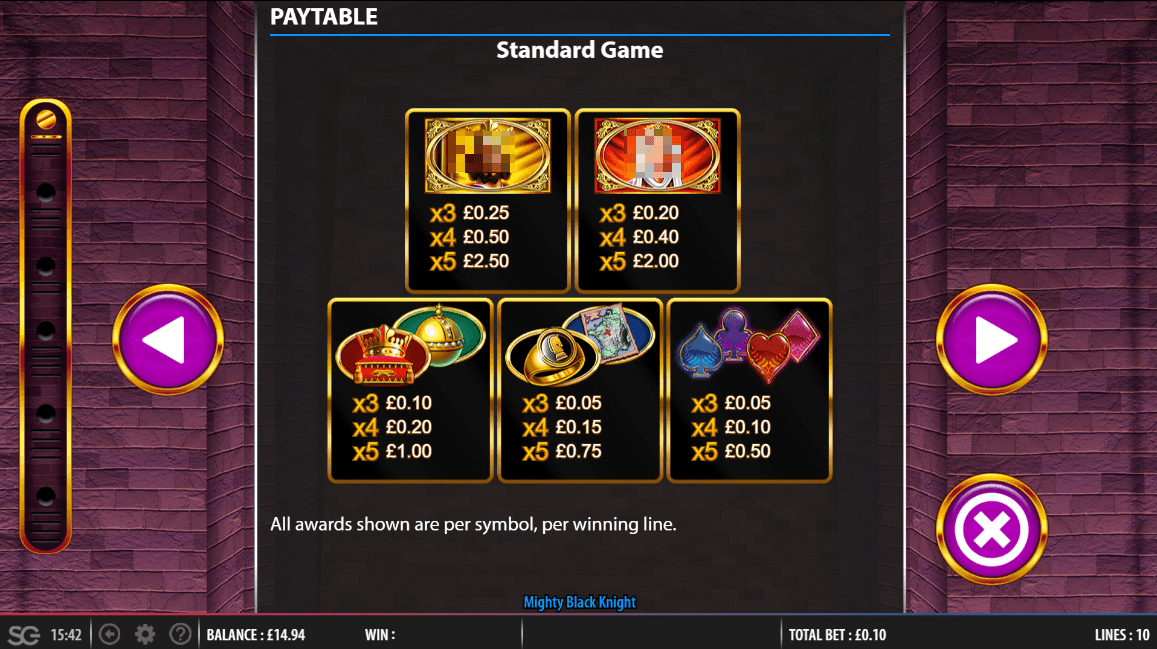 Does Mighty Black Knight stand out from other slot games? Yes, it does. Is it purely based on positive features in this particular slot game? Not entirely.

Mighty Black Knight has an interesting storyline, reasonable statistics, and unique bonus features. It does, however, disappoint in terms of graphics and gameplay.

Does Mighty Black Knight sound like a slot game you'd enjoy? This online slot game, as well as hundreds of others including Legend of the 5 Ninjas Jackpot slot, is available to play for real money on Thor Slots. The online casino features over 600 slot games of various niches, all under one domain!

Not only that, but Thor Slots also offers multiple promotional offers. Their Welcome Bonus can win new punters up to 500 Free Spins (Full T and C’s Apply).

Other bonuses such as the sites weekly, monthly, and birthday bonuses can also earn punters free spins on various games (Full T and C’s Apply).