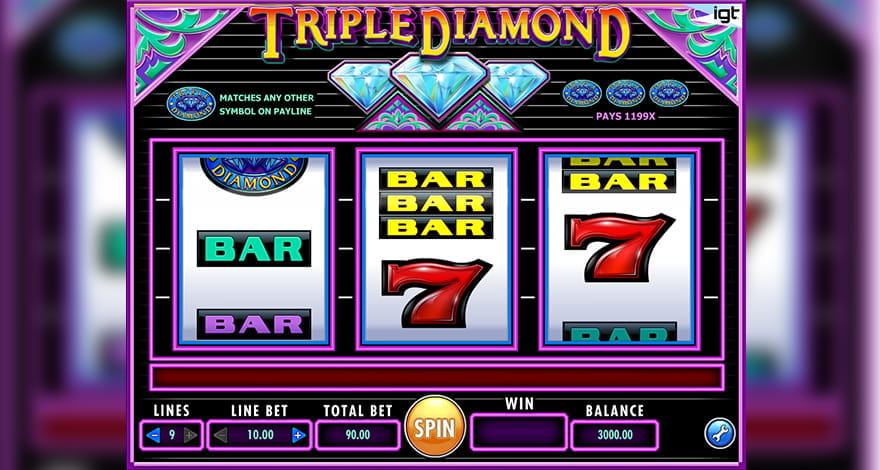 Three-reel slots, also referred to as classic slots, are slot games with three vertical components or reels. Traditional slot machines started off by featuring three of such components. The very first slot machine, Liberty Bell, incorporated four symbols; a heart, a spade, a diamond, and a cracked bell, across three reels.

As technology progresses, traditional elements become more conversational than practical. While this might be true in part for classic slots i.e., mechanical slots, three-reel slots are still enjoyed by a huge number of casino free slots players.

In my opinion, three-reel slots have their foundation cemented in the world of gambling. No slot mechanic fancy enough can replace the simplistic and traditional element of a three-reel slot. However, technology has increased variability in these slot machines and even brought to life 5 reel slots.

An Introduction to Classic Slot Machines

A slot machine is defined as a machine that generates a game based purely on chance. Most casino slots games operate using a random reel modifier. The probability of a player landing a winning combination is based on a collection of symbols aligning themselves in a particular way to trigger a win. Winning combinations usually feature similar symbols aligning in rows of three (if not more or less).

The term ‘slot machines’ was originally used to refer to both vending machines and gambling games. In the 20th century, the term became more specific and is now used to refer solely to the latter. However, gambling devices are also referred to as the following:

Liberty Bell and Some of the World’s First Slot Machines

From the time the first mechanical slot machine was introduced till the time the first electronic one made headlines, all slot machines operated using three vertical compartments or reels. In fact, Operator Bell was created as a knock-off version of Liberty Bell that incorporated the same number of reels, but with different symbols.

Original slot machines were cast iron slot games that featured three reels with ten symbols printed per reel. A lever was attached to the side of the machine. Players pulled the lever and tested their luck.

In the case of Liberty Bell, players needed to land three matching symbols aligning themselves in a row to trigger a win. Fey incorporated four symbols in his device:

The broken bell was the highest paying symbol; the payout was between fifty cents and a nickel.

The three-by-three setup for these slots remains the same even today. However, gaming developers and software engineers wanted to bring more ingenuity into the world of slot machines by introducing five-reel, seven-reel, and even ten-reel slots.

If you were to either visit a land-based casino or an online one, you’ll find hundreds if not thousands of slot games to play. These games differ in one way or another from the next. However, one thing’s for certain: no slot game can ever replace the humble three-reel slot.

Summarization of the History of Slot Machines

How Have Three Reel Slots Managed to Stay Relevant?

This is due to the fact that three-reel slots have the simplest design, mechanics, and are easier to comprehend.

Matching two or three symbols of a kind on a payline will be enough to trigger a win in three-reel slots. Your gains will be determined once a line crosses through one symbol on each reel; usually from left to right. Most slot machines feature fruit symbols, but modern slot games can feature almost anything. There’s also only one payline.

More recent three-reel slots have upwards of ten paylines. These paylines can be triggered either horizontally, vertically, or diagonally

It is, however, noteworthy that a majority of three-reel slots have high volatility or variance.

Volatility or variance in a slot machine is used to refer to the probability of a player landing a winning combination. To put this in context: a game with high variance, such as a three-reel slot, is less likely to trigger a win. However, when it does, it generates larger wins than other slots with low variance.

Highly volatile three-reel slots often include blank spaces in their reels. They’re found in the middle of each symbol within a reel. Blank spaces have no value but are included in highly volatile slots with higher payouts.

Three-reel slots are the simplest slots that can be played. In fact, these slots are particularly loved by casino novices who want to build up their skill and by experts to relive a sense of nostalgia.

Since you’ll be playing these slot games for actual money, it’d be a smart move to understand how they work and how much they pay out. First thing’s first, check the paytable and familiarize yourself with the statistics and symbols of the game.

Most three-reel slots have wild symbols, scatters, and several multipliers. From the paytable, ascertain how much each one of those symbols pays and what would trigger a multiplier.

You can place your bet per spin or per payline. For slots with more than one payline, you’ll want to bet on all paylines - you don’t want to miss out on a winning combination formed on a payline that you didn’t bet on.

Double Diamond is a three-reel slot game developed by IGT labs originally for land-based casinos. The game features traditional elements such as:

The game has developed a significant fan-following over time. International Game Technologies (IGT) has released several variants of their game including Triple Diamond. Double Diamond’s popularity is based on the fact that it’s simple to play, has a low wagering requirement, and has significant returns.

Developed by Greentube, Mega Joker is an online, classic fruit machine with 5 reels and 40 winning paylines. The game features classic symbols as well as added Wilds and Scatters to make the gameplay as interactive as possible.

Triple Monkey is a three-reel, online slot game that takes players on a tropic island as the games’ characters - the monkeys, try to figure out ways to help players score big.

Chinese Kitchen takes players into a traditional, Chinese kitchen with a chef and his apprentice in the back and players figuring out winning combinations at the front.

Triple Red Hot 777 is an online, three-reel slot game developed by IGT. The software developer has been known to create numerous slot games and is considered as one of the earlier developers of slot machines - playable on land-based casinos and for online gaming.

3 Reel Slot Graphics: How They Have Evolved Over Time

The first slot games to have ever been released, whether they were mechanical, electronic, or completely video-based, were all modelled after three-reel slots. This is in part because three-reel slots are simplistic in their design and functioning. Three-reel slots, therefore, serve as a template for all new releases.

Graphics for three-reel slots have changed considerably over the years. Older games such as Double Diamond feature older graphics and themes such as retro visuals and sounds. Newer versions of three-reel slot games feature more modern mechanics, designs, and animations.

Older versions of three-reel slots include:

Newer versions of three-reel slots include:

Mobile gaming slot games are easily available on a number of online casinos. One such casino is Thor Slots - where players play an extensive collection of games and join in on the raid!

To access these games, all players need is a mobile phone and a stable internet connection. Simply log in to your existing account or set up a new one on Thor Slots. A range of mobile games can be played on the go wherever you are!

Thor Slots offers new players attractive welcome deals. This includes a chance to play the ‘Mega Reel’ for free which offers prizes including Amazon vouchers and up to 500 Free Spins (Ts & Cs Apply)!

Mobile gambling has been gaining popularity every day and most casino software providers have released mobile versions of their own slot games that can be played from iOS and Android devices, Windows Phones and different tablets.

To play three-reel slot games, casino fans do not have to look too far. You can access a range of three-reel slots based on several themes, symbols, and payouts on Thor Slots.

Thor Slots is an online casino that has over 500 slot games from various leading developers all across the world.

And you’ve successfully joined the raid! You can now access a world of slot games of all types, sorts, and themes!

Three-reel slots have existed for centuries at this point. Their popularity comes from the fact that they’re simple in their design, yet fun to play. The very first slot game to have ever been introduced was a three-reel slot game as well.

I personally feel like three-reel slots have no alternative, however, they should be revamped at least slightly to incorporate better payouts, bonuses, and wins.