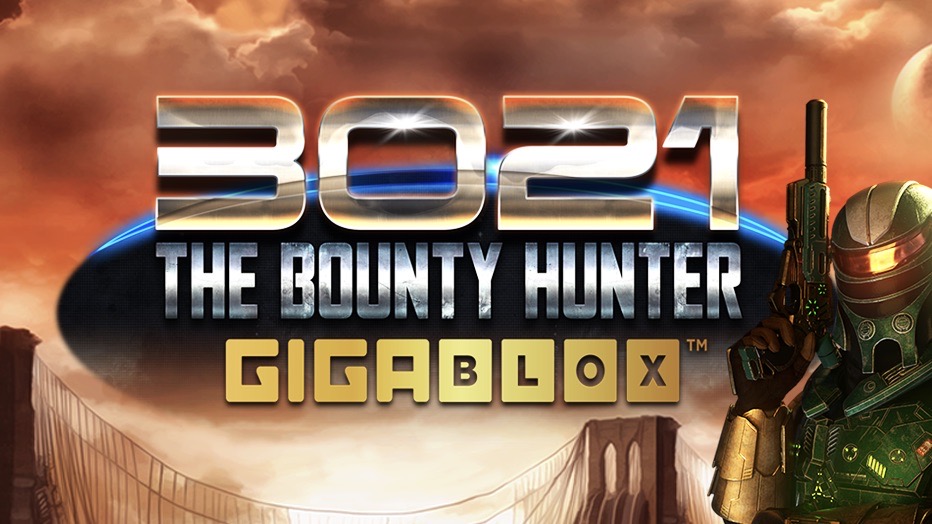 Released in 2021 by Yggdrasil/ Reflex Gaming, 3021 The Bounty Hunter slots’ gameplay takes punters 1000 years into the future with 6 reels and 40 paylines, where SK-100 must defeat delinquents to reestablish law and possibly achieve mega riches in the process.

Stakes in this slot start from only £0.20 per spin, up to £100. This makes the 3021 The Bounty Hunter free slot a great game for all types of players.

Released in August of 2021 and set in the year 3021, there’s a lot to look forward to in 3021 The Bounty Hunter slot game. The Gigablox styled game features interesting gameplay along with an immersive storyline to keep punters on the edge of their seats.

Years of nuclear warfare have forced civilization to go underground. Criminals, thugs, and gang members are free to roam the Earth in its lawless state. With no one to enforce the law, these offenders reign in their anarchy. That is until the bounty hunters come to town and reestablish civilization as we once knew it to be. Among these vigilantes, there’s SK-100. The most powerful and feared bounty hunter of them all.

This science-fiction futuristic-looking freeslotgames title was developed by Yggdrasil gaming. The game is played on 6-reels with 40 fixed paylines and several symbols including low-paying card symbols and high-paying character symbols.

Never doubt the difference immersive gameplay can make in a game. While the statistical value of a game is undoubtedly important, so are the visuals of it. Luckily, 3021 The Bounty Hunter slot has a backstory, interesting gameplay, and an energetic soundtrack.

3021 The Bounty Hunter is set in the year 3021 with a futuristic theme following years of nuclear warfare. Criminal offenders have plagued the Earth and civilization has shifted underground. Difficult times call for alternate measures - it’s time to call in the Bounty Hunters.

Led by SK-100, the Bounty Hunters are trying their best to restore law and order in the underground cities. The graphics in this game are rather industrial-like and not cartoon-ish at all, albeit animated. The characters are made to look as realistic as possible.

There’s a rather energetic soundtrack banging away while you spin which adds to the rather gritty atmosphere. It’s all rather unusual but the design here works well.

The makeshift slots are surrounded by a cityscape background with toxic air in the atmosphere. There are several symbols in 3021 The Bounty Hunter online slot categorized as either low-paying or high-paying ones:

The low-paying symbols are:

The high-paying symbols are:

If you enjoy the 3021 The Bounty Hunter slot here at Thor Slots, then don’t miss out these other titles from Yggdrasil.

3021 The Bounty Hunter mobile is accessible across all forms of media including desktops, tablets, and mobile phones. The game is compatible with all systems including Windows, Apple, and Android.

Does 3021 The Bounty Hunter have easy Gameplay?

As the screen loads, players are taken into the year 3021 where criminals roam free in the lawless world. Civilization is forced to go into hiding and offenders are more confident than ever.

The game is played on 6-reels against a cityscape background with clear toxic air pollution. There are 40 fixed paylines in the game and betting values range from a minimum of £0.20 to a maximum of £100. The bets can be changed by pressing either the ‘+’ symbol or the ‘-’ symbol located at the bottom of the screen.

There’s a winning table and a control table located at the bottom of the screen, the spin and auto spin button is located at the right of it, and your current stakes plus winnings are displayed above it.

It is important to remember that 3021 The Bounty Hunter is a Gigablox styled game. Basically, the game features colossal characters ranging from 2x2 to 3x3 and finally 4x4. This creates more pleasing visuals plus guarantees more wins.

The latter is made true by the fact that 3021 The Bounty Hunter has Low volatility. The premium symbol, the Purple Character, earns players a chance at winning 6x their multiplier value, which might not seem too much but doesn’t seem too bad either.

Where Can I Play 3021 The Bounty Hunter Slot Game?

Players can access a range of slot games based on several themes, symbols, and payouts on Thor Slots.

Thor Slots is an online casino that has over 500 slot games from various, leading developers all across the world.

And you’ve successfully joined the raid! Now you can access a world of slot games of all types, sorts, and themes. New players earn a chance at winning up to 500 Free Spins (Full T’s and C’s Apply).

Are there any Free Spins and Bonuses available?

3021 The Bounty Hunter is an interesting game with immersive gameplay, but the game doesn’t necessarily have many bonuses and Free Spins.

My Personal Take on 3021 The Bounty Hunter slots

All in all, 3021 The Bounty Hunter features immersive gameplay with attractive visuals and a cool backstory. However, is that enough? The game has low volatility, but even the premium symbols can trigger a maximum of 6x the multiplier value.

If you want to discover other games to play at Thor Slots, then have a look at the 243 Crystal Fruits slot from Tom Horn Gaming.