Slingo Originals turn another video free.slots hybrid with its Slingo dose. This time the lucky slot is well-known Reel King by Novomatic.

All the action happens on the 5x5 grid filled with various numbers, the same as a bingo card. The betting range for Slingo Reel King is standard £0.20 to £25 per single round. Players get 11 spins to transform the static numbers on the grid with the reel’s dynamic ones below. It's a fixed 12 paylines Slingo version with the highest winning potential of 500x of the player's stake.

Slingo Reel King was released in January 2021 and is featured at Thor Slots game collection for real money. A detailed review of the Slingo games will give you an idea of the gameplay and bonus features.

Statistics of any of the best slot games is always my first stop to understand what to expect from the Slingo game. If we look at the finer details of the Slingo Reel King, it's obvious it's similar to other Slingo versions like Slingo Starburst and Slingo Centurion.

The theoretical RTP of the Slingo Reel King is 95% which is a little higher than its original version. It means for every £100 wager, players get £95 in return, and the casino gets about 5% as the house edge, which is decent for an average standard. The low to medium volatility gives players a chance to win frequently but with lower winning values. The highest winning potential of 500x is the same for both versions; however, it is attainable with a full house with Slingo format.

The theme of the Slingo Reel King is majestic. As soon as the game loads, you will see a royal blue background with an elegant gold pattern. Instead of the standard round button, the SPIN button on your right activates the reels by spinning the bingo ball.

The numbers on the grid are marked off by a crown that completes the royal theme of the game. The soundtrack accompanying the spins and wins is classy and straightforward, and I like how it relates to the Slingo Reel King majestic theme.

The special symbol on the reel below the grid is the Wild that marks any number in the above row, super wild marks off any number in the grid, free spin rewards you an extra spin, and diamond is the blocker that does nothing. Slingo is becoming my new favourite, and I have also tried some other Slingo titles with real money on Thor Slots like;

Do you like to play casino games on the go like me? It's time to share my experience of the Slingo Reel King on mobile devices. The game works impeccably on any mobile device equipped with HTML5 or Flash browser, from loading to spinning.

Slingo Originals is a new developer in the industry and has developed mobile-friendly games that include Slingo Reel King. Desktop or mobile, you will experience the same classy design, premium graphics, and smooth spinning experience.

Slingo is an easy-to-play casino game that does not require much to learn. However, if you are familiar with the slot and bingo gameplay, Slingo is a piece of cake. The guideline below will help you play Slingo Reel King for the first time: 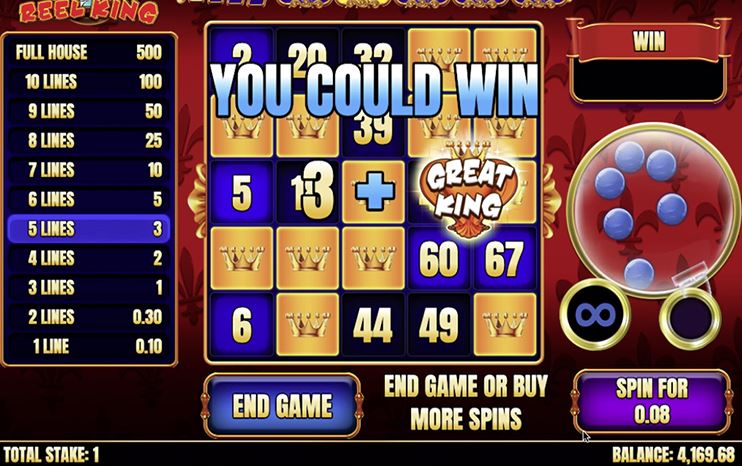 Where can I play the Slingo Reel King slot game?

Slingo is a new format for many players, and I suggest trying it in demo mode first as I did. However, once you understand the game format, it's time to form Slingos with real money on Thor Slots. How?

When it comes to bonus features, every Slingo game has some interesting bonus rounds that can boost your payout. Slingo Reel King has special symbols that increase players' chances to form Slingo except for the diamond (blocker).

Besides these symbols, you'll see a bonus trail above the grid that determines the number of symbols on your grid and cash prizes during the bonus. A random Ding during a spin highlights the slot reel section and lights up one Reel King trail arrow. Let's take a look at what the bonus details entail:

Slingo Reel King Bonus Round - You can trigger the bonus feature round of Slingo Reel King when highlighting at least 5 sections on the bonus ladder. The bar might hold in place, giving players a chance to advance with their numbers. The bonus section rewards players with great King bonuses such as:

With every Reel King character, another 3x1 setup begins on the game that keeps landing wins until the losing spin. You can also purchase an extra spin at the end of the game.

If I compare the Slingo Reel King version with the original, it's obvious that Slingo Originals has done a remarkable job converting the classic slot into a masterpiece. The specialty is the Slingo Reel King is its unique format which is entertaining and rewarding for players.

It's an easy gameplay game that doesn't offer many complicated bonus features; a bonus trail above the grid is the only bonus you have to look for. Overall, I enjoy playing Slingo Reel King on Thor Slots with real money and score this amazing title 9 out of 10 for graphics, simple gameplay, and amazing statistics.

Play Slingo Reel King or other games like the Sisters Gift Fire Blaze slot at Thor Slots today – New players can take advantage of the welcome bonus when depositing £10, and win up to 500 Free Spins on Vikings Go Berzerk(Full T & Cs Apply).