Lost Island is a video slot that revolves around the abandoned and long forgotten goodies in an unknown land. Typically, this is an island with untapped treasures and many reliable resources lying unexploited. The exciting thing about this Island is that once you can find it, you claim it and every other thing appearing upon it with ease. Treasures are hidden in prominent tribal places, where you have to play by the rules or risk losing everything you have worked for. The tribal paraphernalia are there to be adorned on you as you set out for your search on an island filled with the unknown. Deposit by mobile and play Lost Island slot game, where you could find some lucrative lost treasures.

The treasure lost theme, adopted in Lost Island slot, is one that kindles your potential to be patient and meticulous in your dealings because winning requires some measure of planned actions on the Island. To this end, your attention must always be glued to the ultimate treasure, which brought you into the jungles of the Island and nothing more. It is deserving of understanding that this theme is one that few casino developers delve into. The reason for this is that, if it must be done, it must be done very well, so that players would love it.

Therefore, great gameplay has been absorbed in delivering you a slot machine that takes on your curiosity while still awarding you with fantastic cash prizes all in just one turn. You just have to be collected and calculative while rotating the Lost Island reels to your fortune with ease. For some of the best free.slots and many more games follow the above link; for more on Lost Island slot machine, read our full review below.

Lost Island is a product of NetEnt. Formerly operating as Net Entertainment, the company was established in 1996 and assumed full corporate operations in 2002.  NetEnt has a jackpot platform that specializes in progressive jackpots, with millions of ££ paid to winners thereof. Unfortunately, Lost Island is not amongst its progressive slots, but still offers up to £500,000 max win.

Thor Slots is the home of many NetEnt slot games, out of which we confidently recommend the following:

Lost Island is imbued with pleasant images that suit every player's style. It does not have too many flashy images but has a charming appeal that would sit with you almost immediately. The background is set on a rocky jungle of purple color that makes the whole theme look real. Then at every level, you are met with astonishing gold symbols that would most likely draw your attention more profoundly into the game.

The tribal symbols are a beautiful sight to behold in Lost Island slot, as they remind you that even though the lands upon which you tread are long forgotten, they still have their rightful owners, who may one day return to it. But for now, the territories are all yours to reap the resources thereon. This is enough inspiration for you to exploit your adventure on the forgotten Island worthwhile.

The background music is another exciting feature of this game. The music expertly provides you with such ecstatic rhythms and tunes that not only get you in your best behavior but also activate the winner in you! You have to listen and get all your fours in search of your life-changing treasures in the lost Island.

Lost Island video slot has 5 reels and 25 fixed pay lines requiring you to wager on each of them. The winning symbols pay from the leftmost reels to the rightmost ones. The wager is set between a 25-pence minimum and a 12.50-Pounds maximum for a spin. 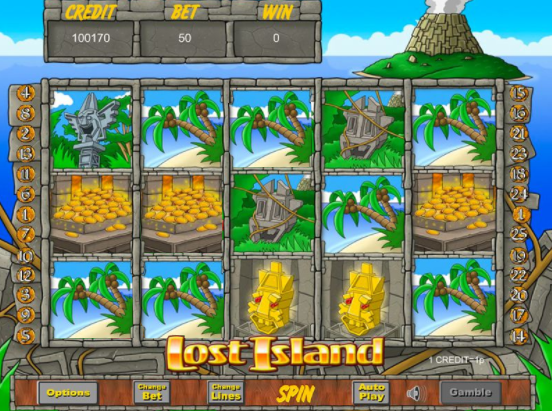 To start betting, you can utilize the following buttons:

The 'Bet' button helps you set your bet, while the 'Level' button enables you to set the stage you wish to play in. Also, the 'Coin Value' allows you to establish how much coin you want to wager on a spin, while the 'Max Bet' button helps you choose the maximum amount to wager on a spin. Also, the 'Spin' button gets the reels rotating, while the 'Autoplay' button gets the reels turning automatically till your wager is exhausted.

All symbols in Lost Island

There are standard card symbols of Q, J, A, K, 10, and 9 in Lost Island. While there are tribal mystical symbols such a Tribal Drum, a flaming purple flower, a gold-purple tribal emblem, a tribal headband, and a gold-colored monkey as the advanced symbols.

The flaming purple flower is the wild symbol and is the highest paying symbol in the game. It changes all other symbols when involved in a win, except the scatter symbol. If just 1 of the flaming purple flower symbols joins to give you a win, that win is increased by a 2x multiplier. This wild symbol can pay you as high as 500 times your wager value by landing 5 of it on the Lost Island reels at the same time! Landing 3 gives you a win of 2000.

The gold-purple tribal emblem is the scatter symbol, and it offers you up to 450 times your wager value. When you get at least 3 of it appearing around the reels, the Lost Island free spins feature is launched with 15 free spins awarded to you.

A 2x multiplier increases all wins in this round during this feature; if you get another 3 gold-purple tribal emblems on the reels, you will receive an extra free spin, capable of giving you a win of up to 760 times your wager value. 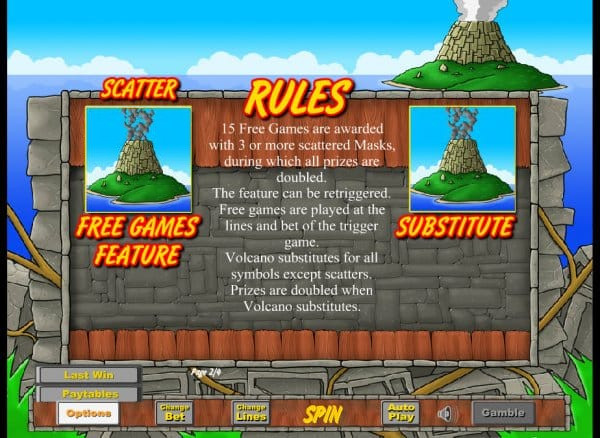 Lost Island slot thrives on multiple winnings during the wild feature, so keep your full watch on the wild symbols. On the whole, you get an amazing experience playing this slot all the time. Give it a try, and thank us later! If you enjoyed this game why not also check out Fluffy Favourites Jackpot slot on Thor Casino?